Walking Away from the Constant Struggle Between Love and Hatred, Gratitude and Resentment (Photo)

Ding Weifen's wish appeared to be ordinary and simple. Marry a good man, have a roof over her head, have sufficient food and clothing, and smart children. She also hoped that her family would be at peace and enjoy happiness and good health. However, her reality did not reflect her dreams. She painfully struggled with intense feelings of love and hatred toward her family members, feeling gratitude at one moment and resentment the next. The ongoing emotional roller coaster contributed to two suicide attempts. Fortunately, she was introduced to Falun Dafa and the universal principle of Truthfulness-Compassion-Forbearance. She then realized the true meaning of life, how to free herself from the entanglement of gratitude and resentment, and how to treat everything and everyone in her life with compassion. Her mood became especially sunny, like a clear blue sky after a dark cloud disperses. 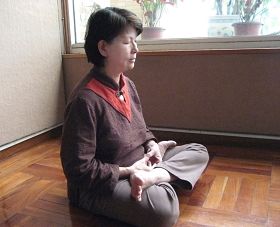 Ms. Ding's husband is handsome and has an engaging manner. Being attractive to the opposite sex, he continued to engage in extramarital affairs, writing a long statement of repentance to his wife after each one. Ms. Ding originally sought solace by focusing her attention on her eldest son. Her mother-in-law however, took their son away, claiming that because Ms. Ding and her husband both worked, they were unable to properly look after him, and she refused to give their son back under any conditions. Ms. Ding's son became spoiled living with his grandmother and developed bad habits, including laziness. Without being able to parent her beloved son appropriately, Ms. Ding was in great distress and continuously fought with her husband, who dared not disobey his mother. Consequently, they quarreled every two to three days, and even her husband's brother and younger sister, who worked in the same office as Ms. Ding's husband, fought against her.

Ms. Ding always felt supported by her parents, but she felt that in her husband's family, only her father-in-law was sympathetic to her situation. This, however, was only temporary, as he was unable to stand up to his family members and ended up joining them to bully her. Ms. Ding's family members felt it was not their place to interfere in her marital conflict, and didn't want to add to the tension, so they didn't actively stand by her side. She felt very isolated and helpless, and attempted suicide two times but failed. During the time of her recovery, the situation slightly improved. But soon afterwards, a similar dynamic of bitter fighting repeated itself. A vicious cycle, just like a nightmare, followed her closely. She felt no interest in life, and if not for her son, would have felt her life was without any meaning or purpose.

Around 2000, her office suddenly had "qigong fever." Even Ms. Ding spent large sums of money to learn qigong. There were all kinds of qigong being taught. Everyone chatted while practicing, and not long after, Ms. Ding grew bored. One afternoon as she strolled through the botanical garden, she saw people practicing Falun Gong. She immediately was attracted by the melodious music and what felt to her as auspicious energy. She felt very comfortable and watched for a long time. She saw that this practice had simple movements and was easy to learn, and thus began her desire to learn. With help from a local practitioner, Ms. Ding began practicing soon after the Mid-Autumn Festival that year, and has been studying the Fa and practicing the exercises daily since.

Her Situation Changed Along with Her Heart

With more Fa study, Ms. Ding gradually understood that she was drowning in the abyss of sentiment and could not let go of attachments, so her conflicts became more and more intense as she fell deeper and deeper into the abyss.

Every time she read this section of the Fa, she had a new understanding and an increased motivation to unceasingly follow Truthfulness-Compassion-Forbearance. She looked inward to find her attachments, and as soon as her heart was stirred, she remembered Teacher's words:

"...you should always maintain a heart of benevolence and a mind of kindness. If you suddenly bump into a problem, you will be able to take care of it properly." (Zhuan Falun)

Ms. Ding no longer struggled over how her husband's family treated her and only asked herself whether she had acted according to the standards of a practitioner. She no longer quarreled with her husband but focused on looking after her family and working, and she practiced the exercises and studied the Fa every day. When her sister-in-law was pregnant, Ms. Ding prepared a lunchbox for her every day and always brought things to her mother-in-law's home. After a period of time, there were remarkable improvements in Ms. Ding's relationships with her in-laws. Her relationship with her mother-in-law became harmonious and her sister-in-law warmed to her. In addition, her husband no longer had extramarital affairs. The family atmosphere became calm, and family interactions became steadily more agreeable. Ms. Ding's work colleague, who sat opposite her, said, "I've noticed that you have changed a lot since practicing Falun Gong--your temperament has changed a lot."

These were not the only changes. Due to her strong attachment to sentiment, Ms. Ding had very poor health. She once collapsed, and the fall caused her body to age at an accelerated pace. Her doctors told her that her bones were like those of an 84-year-old woman. Other dangerous infections continued to emerge one after another, and she was consequently listed as a specially-attended patient. Since practicing Falun Gong, she has shown astonishing improvement, and her body is like that of a young person.

Ms. Ding said that in 2005, her 55 year-old husband had a myocardial infarction and had a pacemaker installed. He had to stop working, and without a job, his life suddenly lost meaning and he lost his determination and will. He felt very melancholic and feared that his wife despised him for losing his job. Thus, he didn't let her go out and attend Falun Gong activities. During this period of time, Ms. Ding didn't complain or blame her husband. She continued to perform her duties as his wife, and in fact was even more supportive and caring. She attended Falun Gong activities when she could. In less than a year, her husband's melancholia disappeared, and he became very receptive to her and cheerful. He now does housework, such as cleaning and mopping the floors, and sometimes asks Ms. Ding to show him the exercises.

Ms. Ding said she didn't know to consider others first before practicing Falun Gong, and believed that everyone was out for themselves. She always fought for her own self-interest, whether she was right or wrong, and was very impatient. After she became a practitioner, she reminded herself all the time that she was a practitioner and must behave as a practitioner. She made sure to steady her mind every day and remain steadfast in her cultivation, and her body and mind are becoming more and more relaxed and comfortable every day.

Looking back to the start of her practice, Ms. Ding said that what impressed her the most was the discussion of killing that she read in the Falun Gong books. She realized that taking her own life would have been a tremendous sin. She felt extremely lucky to have been introduced to Dafa at a time in her life when she was completely discouraged. She knew that through Dafa, she had obtained salvation, so she did not end her life. After several years of practice, she has deeply experienced how valuable life is and has understood the true meaning of life even more. She also knows how lucky Falun Dafa practitioners are.