(Clearwisdom.net) On March 7 and 8, the 19th Asian Culture Festival in Florida was held at Fruit and Spice Park in Miami. Thousands of people turned out to enjoy the cultures of China, India, Thailand, Japan, the Philippines, Pakistan, Turkey, Korea and Vietnam. Local Falun Gong practitioners also had a booth. 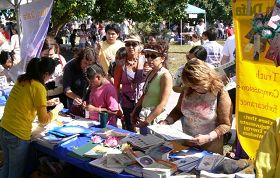 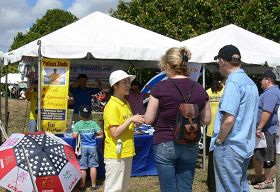 Clarifying the truth to people 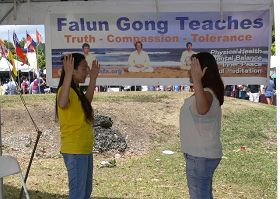 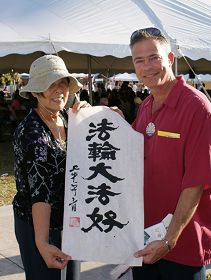 Tourists liked the calligraphy, which read: "Falun Dafa is good."

Many people stopped by the practitioners' booth. Practitioners took the opportunity to clarify the truth and expose the brutal persecution to people. Some Chinese people also asked for detailed information. Many people expressed an interest in learning the exercises, and some learned them at the booth. A graduate student said she felt strong energy when doing the exercises. In two days, practitioners passed out several boxes of informational materials, helping many people learn about Falun Gong.