After Performing in Taipei, DPA Travels to Taichung (Photos)

(Clearwisdom.net) From February 25 to March 2, 2009, Divine Performing Arts (DPA) staged eight shows at the Taipei International Convention Center (TICC). The DPA shows celebrate China's five thousand years of history and its beautiful culture. It has received praise from thousands of audience members. Starting on March 4, the group will perform in Taichung.

After Musician Zhang Zemin attended the show on March 2 for the first time, he expressed his appreciation for the company: "The dancers are both talented and skilled. I am deeply touched...An orchestra as large as this one is a dream for dancers. When the ethnic dances and Chinese dances have a wonderful orchestra, it is a match made in heaven." Zhang could hardly find the right words to express his excitement. 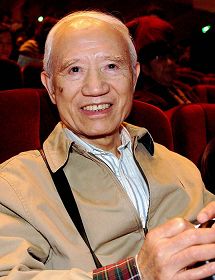 Zhang Zemin gave high marks to every musician: "They include some of the best Chinese traditional musicians, as well as Western ones. Their performance was simply outstanding tonight."

Mr. Zhang highly recommends that his colleagues in the artistic circle see the show: "This show has a very high artistic achievement, and it is a top artistic performance."

After watching the DPA show on February 26 for the first time, famous vocalist Lu Lili came to see the show again on March 2. She was highly impressed by the professionalism of the performers. "I am so touched by their attitude toward the show, every single move, every expression and every step reflect their professionalism." 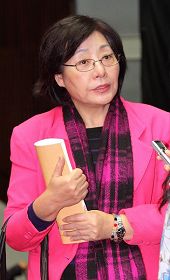 Lu Lili is a famous vocal artist who performed in "Madame Butterfly" at Czech's Prague Opera House. She also produced major entertainment programs such as "Asian Opera Festival" and "Night of Asia Pacific" in Taiwan. She has frequent appeared on the international stage.

Ms. Lu expressed her admiration of the show. "The stage set is very clever; it gives people a beautiful image. Ordinary stage sets could not create this effect. The multimedia backdrop is a huge success, especially the use of the special effects. The realistic integration of the dancers and backgrounds impressed me the most."

She thinks that the dance music was particularly good. Some music pieces may come from songs, and after adaptation, they were played as dance music. Ms. Lu said, "The DPA brings back the real Chinese traditional culture, and the show teaches people to pursue a true and compassionate life."


Senior Photographer: The Performance is Both Elegant and Beautiful

Veteran Photographer Zhong Yonghe used to serve as the designated photographer in Taiwan's News and Publication Agency. He has thirty years of experience in photography. After watching the show, he was deeply moved by the natural rhythm of the dances. He said, "The program presents beauty; the dancers' movements were flawless and natural; the music was pleasant. The performance is world class without question. The beautiful dances were full of energy. They went far beyond basic dances and songs. Everything comes together as an integral picture, a natural rhythm."

Over the course of his photography career, Mr. Zhong used to go to Tibet. The "Dance of the Snow-Capped Mountain" made him feel like he was back in Tibet again. He explained, "This ethnic dance is exactly the same as the real Tibetan dance I saw over there. I can feel the experience again. After watching the show, if you visit that place, you will feel the spirit of Tibet."

He was also impressed by the integration of the backdrop with the stage performance and by how smooth everything came together. "I could not see any trace of cut-and-paste; the whole thing came together naturally. It was just amazing. It appears that the dancers were not dancing, and they were living in another world. The show is as natural as water in the river and clouds in the sky," he said.

Zhong Yonghe also admired the costumes, the music and the whole production. "It was a visual feast watching this beautiful show, and a motivation for goodness. The show is like a beautiful painting or a photo, it inspires people."

He also had a special peaceful feeling about the dance segment "Heaven Awaits us Despite Persecution." He said, "I could feel protection from God. All good people are blessed."

A former Chief Executive Officer of Eva Foundation, You Changhe, watched the DPA show for the first time. He was amazed by the world class performance and he thinks the show will help promote Chinese culture. He said, "The dance movements were very precise; the costumes were special and gorgeous; the backdrop design was not easy. The costumes were not only colorful, but also superbly designed. The three-dimensional backdrop was special, and integrates to the dances smoothly." 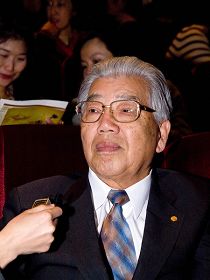 He was especially moved by the dances from ancient stories. He especially enjoyed "The Monkey King Triumphs." "The Dance about Tang Monk's journey to the West was a wonderful stage show, interesting and lively." He was also impressed by "Heaven Awaits us Despite Persecution," about which he said, "The program shows how the persecuted practitioner ascends to Heaven. It moved me deeply. A good person, despite his physical death, his soul ascends to heaven."

Mr. You Changhe summarized his feelings, saying that the overall message of the show is Compassion.

After watching the Taipei Final show, Lions Club International 300B3 Region President, Mr. Liu Dezong, highly praised the DPA for carrying on the five thousand years of Chinese culture. He said, "DPA brought the Tibetan dances to Taiwan. It was a wonderful performance."

Liu Dezong's favorite dance was "Dance of the Snow-capped Mountain." He was amazed by it. He explained, "The expression on their faces and their dances make me feel energetic."

He thinks many people, especially young people, don't know much about the traditional Chinese culture, which he feels should be promoted and publicized. Mr. Liu said, "We should tell the young people about the ancient culture, let them know how hard life was thousands of years ago. DPA is doing that through its arts; that is indeed the best thing for Chinese culture."

He was also impressed by the full audience attendance here. It means that many Chinese people want to learn about their own heritage.

After the General Secretary of Taiwan Government Council of Culture Affairs (CCA), Ke Jiliang, watched the DPA show, he believed that the entire show was an extension of the Chinese culture. He said, "The dances are very elegant, very traditional. Their movements are so much in sync. The dancers' beautiful figures were exemplified. I think the dances really demonstrate the essence of Chinese culture." 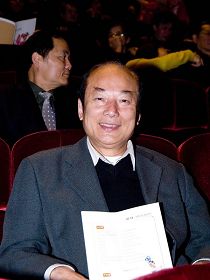 Mr. Ke felt that the dance "The Monkey King Triumphs" was an excellent dance that teaches people profound wisdom: "The whole dance and the idea behind the production are very good; using the familiar story of Journey to the West as background, the dance tells people that as long as one insists on his pursuit of the ideal, then he will be able to succeed. I think this is very interesting way to demonstrate that concept."

Mr. Ke was especially impressed by "Heaven Awaits us Despite Persecution." He said, "The practitioner was persecuted by bad people for his own belief, but he refused to compromise his principle. Finally he achieved eternal life."

The DPA's expression of compassion and beauty is a major reason for its popularity. So many people love it because "in addition to dances and music, people feel they can have a very beautiful and happy life."