(Clearwisdom.net) A well-known scenic site in Singapore's Merlion Park is generally busy with tourists. A Falun Gong practice site beneath the bridge near the Coast Art Center has become a unique feature of the area. The peaceful music, graceful movements of the practitioners, and posters explaining the facts of Falun Gong draw the attention of local people and tourists alike. 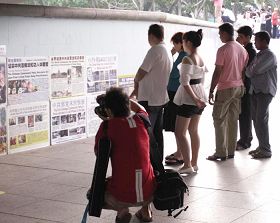 In July 1997, the Chinese Communist Party (CCP) initiated a large scale persecution of Falun Gong. Practitioners in Singapore--like those in other countries--prepare truth-clarification materials and explain the facts in Merlion Park during their after work hours.

The practitioners want to tell people that Falun Dafa is good and not to be deceived by the CCP's lies.

Mr. Cai is a senior practitioner in his 70s. In bright sunshine or heavy rain, he manages to arrive at Merlion Park with posters and materials weighing more than 60 pounds. He takes no holidays or Sunday off. For ten years, he has shown up every day.

Mr. Chen, his wife, and their daughter and son looked at the posters for some time. Since they are from Singapore, they did not know about Falun Gong or the cruelty of the persecution. Mrs. Chen learned that 3,242 practitioners have been tortured to death in China and many were also killed for their organs. She said repeatedly, "This must be stopped!"

A middle-aged lady told a practitioner in a low voice while accepting a flyer, "I am from a 610 Office." In the end she said sincerely, "Falun Gong practitioners are good people!" She also asked for a copy of the Epoch Times.

On February 3, the heavy rain let up somewhat. Mr. Cai, who was distributing flyers, sensed a glare and was puzzled since it was raining. He raised his head and saw strong golden light rotating in the clouds above the clock tower of Victoria Music Hall. In a little while, sunshine appeared through the clouds in colors and rotated rapidly. He realized it was flying Falun.

Mr. Cai called the other four practitioners who were doing the sitting meditation. All of them saw the flying Falun with colors changing from pink to golden. It was 5:50 p.m.

Many tourists and residents also saw the marvelous phenomenon. An old man who often came by bike and had a nap under the bridge called the practitioners to look from the other side for a clearer image.

Many Chinese tourists took photos. A wedding photographer said even his good camera could not capture the animation and the colors.

After 6:10 p.m., the sun appeared. The Falun was still rotating, though not as obviously or brilliantly. Slowly it went behind the clouds.