On February 21, the 2009 US West Falun Dafa Experience Sharing Conference was successfully held in Los Angeles. More than 20 practitioners shared their experiences of striving to live according to the universal principals of "Truthfulness-Compassion-Forbearance" at work and in daily life. Many practitioners shared how they clarify the truth of Falun Dafa to people. 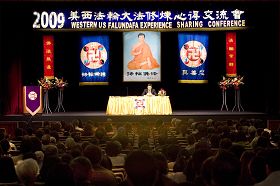 Practitioners shared their experience at the conference

This year marks the tenth anniversary of Master Li's first lecture in Los Angeles. Mr. Youfu Li, president of the US West Falun Dafa Association, said that he still vividly remembers Master Li's first visit to the city. "When I saw Master, tears immediately filled my eyes. During that visit, Master not only gave a lecture but only answered questions from us. I deeply felt Master's vast compassion.

"Shortly after the lecture (1999), the "April 25" Appeal to the Chinese Communist regime happened. In July, then-Communist head Jiang Zemin started the persecution of Falun Dafa. To let people know about the truth, practitioners around the world started to print and distribute truth-clarifying materials. Today, we are using all possible means to clarify the truth and thus many people have learned the facts about Falun Gong and the persecution. During this10-year period, Master Li has done so much for us and for all people, to save us. Sometime, we stumbled. Master always pointed out our problems in a timely way so that we can correct ourselves..."

Practitioner Ms. Li saw Master Li in person in the 1999 US West Conference in Los Angeles and then started her journey of cultivation. She said, "When I just started to practice, my intention was to be a good person. At that conference Master told us that society would become better only if people change themselves from inside. I was deeply touched. At the conference, a number of practitioners shared how they cultivated diligently to live according to the principles of 'Truthfulness-Compassion-Forbearance' in order to be good people. The sharing was very moving. It was a very precious memory for me..."

Practitioner Mr. Chu, an environmental specialist, learned about Falun Dafa in 1996. At the beginning, after reading Zhuan Falun, he felt that the book revealed many truths and yet he didn't find time to study more. When the persecution started in 1999, he felt puzzled after he read many slanderous materials against the practice. However, as a researcher, he didn't stop there and instead he did his own investigation. After reading many practitioners' sharing articles posted online and reviewing Master Li's teachings, he realized how precious Dafa is and started to practice. He also printed a copy of Zhuan Falun for his wife, who also started to practice shortly afterward.

Before the conference concluded at 5:00 p.m., a video collection of Chinese New Year greetings to Master Li was played. The greetings came from Mainland China and practitioners around the world.