(Clearwisdom.net) Mr. Jiang Xiqing, 66, was taken to the Xishanping Forced Labor Camp several days before the Olympic Games started. On January 28, 2009, he died because of severe persecution. The circumstances surrounding his death is very suspicious and full of contradictory evidence. Six hours after his death was announced by the guards, his philtrum, chest, abdomen, and thigh were still warm. Mr. Jiang's children were furiously indignant about his death. They insisted on receiving a explanation. Below is the petition letter they wrote. 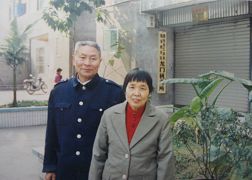 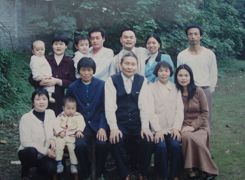 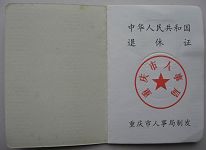 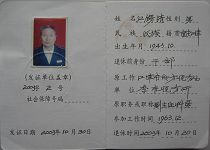 On May 13, 2008, Fan Yungui and Chen Jican, from Youxi Police Station in Jiangjin District, arrested our mother, Ms. Luo Zehui. At 9 a.m. on May 14, 2008, more than 20 people from the local police station, 610 Office, State Security Division and local tax bureau, searched Mr. Jiang Xiqing's home in Room 301, Jizi Building, Local Tax Bureau, Jiangjin District, Chongqing City. They seized a computer, a cell phone, a printer, 1,410 yuan in cash and Dafa books, and arrested Mr. Jiang Xiqing. At around 9 p.m. on May 14, 2008, Mr. Jiang Xiqing was transferred to Jiangjin District Detention Center from the Youxi Police Station. On the same day, Mr. Jiang Hongbin was summoned to talk with the police officers and agents from the local "610 Office". His home was also searched. Afterwards, he was taken to Youxi Police Station for investigation and interrogation. Also, he was forced to sign the arrest warrant of Ms. Luo Zehui. Even though Ms. Luo was arrested more than 24 hours earlier, the police officers demanded that Mr. Jiang Hongbin fill in the arrest time specified by them.

Later, Mr. Jiang Xiqing was sentenced to forced labor. We were not notified at all. Up to now, we have not not received any letter that informs us about the sentence he received. After many inquires, we learned that Mr. Jiang Xiqing was taken to Xishanping Forced Labor for a one year term, which was to last from June 25, 2008 to June 24, 2009. The term was also extended by 40 days without any reason. When Mr. Jiang Xiqing was detained in the detention center, his daughter Ms. Jiang Hong once went to the State Security Division to inquire about her father's situation. Mu Chaoheng talked wildly, claiming that he had absolute power and would discipline whomever he wanted to, and the sentence was because of his wishes. He threatened, "last time (in 2000), when Jiang Xiqing and Luo Zehui were taken to the brainwashing center, they escaped a sentence of forced labor or imprisonment just because Jiang Xiqing was old. This time I will sentence him to one year of forced labor."

In late July 2008, the family of Mr. Jiang Xiqing's daughter, Ms. Jiang Hong, Mr. Zhang Daming and Mr. Zhang Xiaoyue, went to the 1st team of the No. 7 Division of the Labor Camp to see Mr. Jiang Xiqing. There, they learned that he was subjected to harsh treatment. He mentioned that he was forced to stand from morning till night. He said, "I am too old to bear the standing. I am forced to write a statement saying I give up my belief. That is the deal for lightening my physical punishment. Only then will I be taken to the 2nd team of the No. 7 Division to serve the sentence." Since then, we, our spouses, and other relatives went to the see our father now and then.

On the morning of January 25, 2009, Mr. Jiang Xiqing called Jiang Hongbin. He inquired about the situation of our mother Ms. Luo Zehui. Jiang Hongbin said that she was sentenced to eight years of imprisonment and we could visit her on the lunar new year.

After we hurried to the labor camp, we were told to go to the Yuxun Hotel. A group of guards came out of the hotel, most of them smelling of alcohol. They told us to follow their cars to the funeral home. At the funeral home, the staff members informed us of the home's regulations: we could only look at the remains for 5 minutes, and we were not allowed to bring cell phones, other communication devices, photography equipment or video recording equipment. Among the 25 guards around us, one walked forward to open the freezer, and the others began to search our bodies. Jiang Hong and Zhang Daming rushed into the freezer room and looked around in all directions, but could not find the remains of our father.

Someone opened the freezer and said that we could only see the head. Jiang Hong saw our father's face and stretched out his hand to touch it. He found that father's philtrum was still warm. He cried out in alarm, "My father is not dead. He is still alive." The guards around us were dumbfounded, looking at each other and speechless. Jiang Hongbin rushed to the freezer, and pulled out the iron plate on which our father was lying, he touched the chest and found it was still warm. He exclaimed, "My father is not dead. His chest is still warm. If he has been dead for more than 7 hours, his body would not be warm after being in the freezer for 7 hours. Come on and touch it for yourself." Then Jiang Hongbin touched father's philtrum again. Only at that time, did the guards become alert and they tried to push Mr. Jiang Xiqing back into the freezer and close the door. Disputes arose. Father's Son-in-law, Zhang Daming, son Jiang Hongbin, daughter Jiang Hong, and Jiang Ping all pulled their father out of the freezer and placed him onto the ground. They exclaimed, "Come and rescue our father. He is still alive." Chen Qiqiang, father's niece's husband, touched father's chest and asked a guard if he had a thermometer. The guard said no. Jiang Li rushed to the door and cried for someone to call the police.

Jiang Hongbin bade Jiang Hong and Jiang Bin to watch father, and told the guards not to put father back into the freezer. But the guards still forcibly pushed father's body back into the freezer. They pushed Jiang Hong, Jiang Ping, Jiang Li and Zhang Daming out the door. During the process, Jiang Li's hands were injured. Also, the guards of the No. 7 Division pointed at Jiang Hongbin and Jiang Li, and abused them. Also, they threw out all of father's family members and relatives. Guard Liu Hua brought Chen Qiqiang to another room and showed him father's death certificate, which specified the cause of death was acute myocardial infarction. Facing this sudden attack, and the huge crowd of guards, we were grieved, indignant and helpless.

At dawn the next day, we went to the Beibei District Funeral Home to wait for them. Not until 1:34 p.m., we were able to get in contact with Li Yong. He asked us to go to the Yuxun Hotel, where our identities, including our phone numbers, addresses, and workplaces, were carefully checked. Also, only father's four children were allowed to attend the meeting, and other relatives were only allowed to audit. The meeting was chaired by Liu Hua of the labor camp. He read out the meeting content. When he mentioned the process of father's death, he said that father received Scrape therapy (1) on the chest, back, feet, neck and so on in the morning. After the therapy, he went to bed to take a rest around noon. In the afternoon, he was not moving, and it was seen he was very pale. He was taken to the hospital affiliated with the labor camp and he died there. Then Liu Hua announced the so-called stipulation that if we failed to cremate father on time, they would force cremation in three to five days, and we were free to charge the labor camp or the funeral home. People attending the meeting included Huang, director of No. 1 Division of the procuratorate, who is in charge of the labor camp, prosecutor Wu, Tian Xiaohai , head of the No. 7 Division of the labor camp, and chief and political chief of No. 2 team of No. 7 Division. The door was defended by the guards of the No. 2 team of No. 7 Division. Some police officers were staying in the room next door. During the meeting, we proposed several points:

1. The authorities of the labor camp notified us by phone that Mr. Jiang Xiqing died at 2:40 p.m.. After more than 7 hours, why was his body still warm when it was pulled out of the freezer?

2. How was Mr. Jiang Xiqing rescued while in the hospital? Why didn't the authorities of the labor camp notify us when Mr. Jiang's life was at risk?

4 Within 24 hours, a living person turned into a dead one. What explanations did the authorities of the labor camp have for that?

The meeting lasted for more than 1 hour without achieving any result. Later, Huang brought Jiang Hong, Zhang Daming and Jiang Ping to the hallway and said, "We may pay some compensation out of humanitarianism. But I still need to persuade the authorities of the labor camp to do so. Also, the compensation is only a small amount of money." No matter what they said, we refused to sign the cremation agreement before Mr. Jiang Xiqing's cause of death was clear.

The Xishanping Labor Camp and labor-camp-based procuratorate violated the regulations of Detailed Rules on Implementing the Law in the Administration of Re-education Through Labor, which was issued by the Justice Department. We request that the departments concerned to proceed with a public investigation in which Mr. Jiang's family members may participate, and look into those that might be responsible for Mr. Jiang's death.

In a word, we earnestly request righteous people in judicial and other communities to give a helping hand to seek an explanation for Mr. Jiang Xiqing's death, defend the dignity of law and uphold the basic rights bestowed by the Constitution.

(1) A therapeutic method of Traditional Chinese Medicine which involves using special tools to gently scrape the surface of the body along selected meridians in order to open them up and promote the free flow of energy.