(Clearwisdom.net) Malaysian Member of Parliament Mr. Charles Santiago thinks the Spanish court has made an important and critical step forward by indicting Chinese officials responsible for the persecution of Falun Gong. 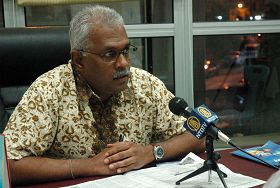 Following a two-year investigation, a Spanish judge has accepted charges of genocide and torture in a case filed against five high-ranking CCP officials for their role in the persecution of Falun Gong.

Indictments have been issued for Jiang Zemin, former head of the Chinese Communist Party and believed to be the instigator of the persecution of Falun Gong, and Communist Party officials Bo Xilai, Luo Gan, Jia Qinglin and Wu Guanzheng.

"I think the decision by the Spanish court to call Chinese officials to account for the mass killing of over 3,000 over people is an important and critical step forward," said Santiago.

"These four organizations are very credible and among the leading human rights organizations in the world. There is a lot of truth in what they say, and they are esteemed in their work for human rights. The Chinese government must be held accountable for their actions and must be transparent in the process of inquiry," said Santiago.

Mr. Santiago stressed the importance of human rights. "In any part of the world, we can have differences of opinion, different belief systems, different ideologies, persuasions, and so on, but just because I don't agree with you, that does not mean I can kill you or commit genocide. That is not acceptable."

The Spanish National Court issued a summons. The court's notification stated that if the charges against the defendants are established, they are likely to face imprisonment for up to 20 years and may be economically liable to the victims for damages. If the defendants fail to respond to the court within six weeks, the judge could issue arrest warrants for them.

In 1999, former CCP head Jiang Zemin singlehandedly instigated the campaign to "eradicate" the spiritual practice of Falun Gong. The genocidal policies of "defame their reputations, bankrupt them financially, destroy them physically, and count their deaths due to torture as suicide" resulted in large numbers of practitioners being arrested, tortured, beaten to death, and going missing. Many had their organs harvested while they were still alive for the lucrative organ transplant trade. The other four defendants are all Jiang's staunch followers.

One of the defendants, Luo Gan, oversees the 610 Office, a nationwide secret police task force that has led the violent campaign. Chinese lawyers have compared the 610 Office to Nazi Germany's Gestapo in its brutality and extra-legal authority.

The other three accused are Bo Xilai, current Party secretary for Chongqing and former Minister of Commerce; Jia Qinglin, the fourth-highest member of the Party hierarchy; and Wu Guanzheng, head of an internal Party disciplinary committee. The charges against them are based on their proactive advancement of the persecution of Falun Gong when they served as top officials in Liaoning Province, Beijing, and Shandong Province, respectively.