(Clearwisdom.net) A large company held its annual national meeting at Bukit Jalil National Stadium, Kuala Lumpur, Malaysia, on the evening of November 15, 2009. More than ten thousand people from Malaysia and neighboring countries attended the event. The person in charge of the stadium granted permission to Falun Gong practitioners to demonstrate the exercises and distribute informational materials outside the stadium. Many attendees at the meeting had an opportunity to learn about Falun Gong that evening.

A practitioner who distributed materials said that there were many young people attending the meeting, and most of them expressed their understanding and support for Falun Gong. Many took materials, hoping to learn more. Some people showed interest in learning the exercises and said they would visit the website. Some had learned about the brutal persecution of Falun Gong taking place in China. They said that Falun Gong is a cultivation practice that teaches people to be kind, and everyone should have freedom of belief. 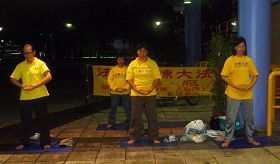 Practitioners demonstrate the exercises outside the stadium 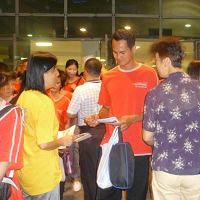