(Clearwisdom.net) In October 2009, the Divine Land Marching Band of Taiwan was invited to perform in the Durga Puja Festival in Kolkata, India. Kolkata is the second largest city of India and the capital of West Bengal. 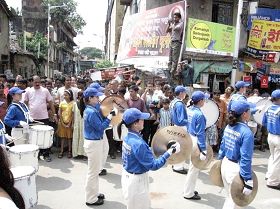 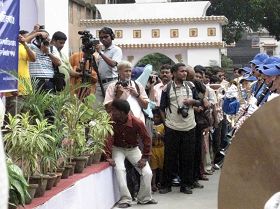 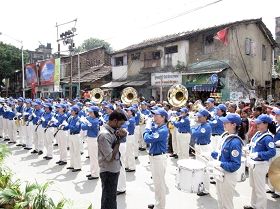 Suren Rao of the India Falun Dafa Association said, "Indian Falun Gong practitioners invited the Taiwanese band to participate in this festival, and it brought with it messages of peace and harmony, things that we all need."

Over the weekend, the marching band held a parade in Chinatown to the crowd's delight. When the marching band arrived at the square in front of a temple, many people surrounded it. One gentleman said, "Falun Dafa is so graceful. I like your performance very much. It was a great first time for me to see it."