(Clearwisdom.net) On October 4, a rally supporting the 61 million Chinese people that have withdrawn their memberships in the Chinese Communist Party (CCP) was held at Boston Common. 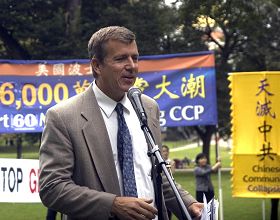 Harold Shurtleff spoke at the rally. 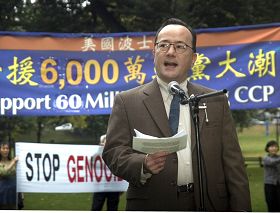 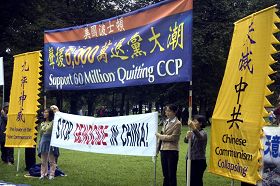 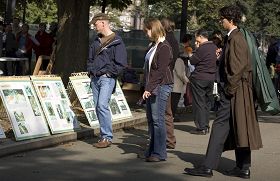 People learned about the CCP's atrocities from the display boards.

As of October 4, about 61,380,000 Chinese people have publicly announced their withdrawals from the CCP. The rally was organized by the Service Center for Quitting the Party in Boston to support these courageous people.

A dozen Chinese and Western guests spoke at the rally. They urged people to recognize the evil nature of the CCP and renounce it. The organizers set up many display boards. They also performed Tang-style drums and sang to celebrate the occasion and draw a crowd.

Harold Shurtleff from the John Birch Society said in his speech that the American government should not support the CCP's tyrannical rule. He said that those who live in a free land have the responsibility to investigate the crimes of the CCP.

John Kusumi, the founder of China Support Network, said he attended a similar rally in 2005, supporting one million withdrawals from the Party. Now the number has reached 61 million. He said, "We have heard the voices from Chinese people's hearts, and we admire their courage." Mr. Kusumi said many Chinese people are still suffering, but he is confident that China will have a bright future.

Ms. Zhou from the service center said that many Chinese people living in China and overseas have quit the Party with help from the center. Many callers from China said they would spread the information about quitting the Party to their friends and family.

Other speakers compared the CCP to the Nazi regime, and urged those present to read the book the Nine Commentaries on the Communist Party to learn about the CCP's track record of lies, back-stabbing, and bloodshed.

Local media, including WRKO 680 AM radio station and The Boston Globe, came to the activity and interviewed attendees. Representatives from other human rights organizations also came to show their support.