(Clearwisdom.net) A Falun Dafa cultivation experience sharing conference was held on October 4, 2009 in Brussels, the capital of Belgium. Twelve practitioners shared their experiences in doing a better job in clarifying the truth. Those attending the Fa conference included new practitioners, veterans who have cultivated for over a dozen years. They were of all ages and walks of life. 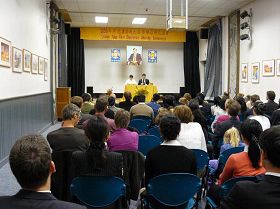 Conference was held in Brussels, the capital of Beligium 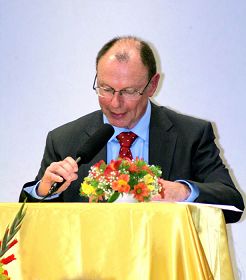 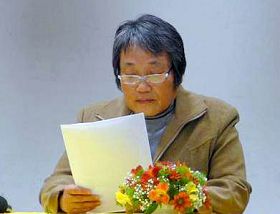 Felix was born into a musical family in the Netherlands, and is good at playing saxophone. Before practicing Falun Dafa, he changed from playing classical music to jazz, and gradually got lost while pursuing showing off himself. He gave up music in the end. However, since he began practicing Falun Dafa, he has taken up the saxophone again and been playing music composed by Falun Dafa practitioners. Along the way, he talks to people about Falun Gong and the persecution in China. In the process, he tries hard to purify his mind, and no longer attempts to show off. As a result, his music has become purer and purer, and the people around him have come to learn about Falun Gong.

Practitioner Nico from Belgium shared his experience of going to the European Parliament, telling politicians about NTDTV and how the CCP regime influenced Eutelsat to cancel it's contract to broadcast NTDTV programming into China. Nico shared how he treated the politicians with compassion and how the MPs changed their attitudes. He came to realize how powerful and important righteous thoughts are.

Ms. Wang from the Netherlands started practicing Falun Gong not long ago. She told of her experience in promoting Shen Yun Performing Arts. She overcame many difficulties and distributed flyers and newspapers about Shen Yun to all households in her local area. She also shared how she understood others and viewed problems from other practitioners' perspectives, how she was considerate of other practitioners, and did better in cooperating with others.

Ms. Xie from Belgium shared her experience in editing for the Epoch Times. She realizes that many shortcomings in her work resulted from not taking saving sentient beings as urgent a task as it should be, and did not place sentient beings to be saved as top priorities at all times. As a result, her improvement in cultivation has been slow. She also realized that she should tolerate practitioners with compassion while doing things.

Nicolas, coordinator of the Belgian Falun Dafa Association said, "We are very pleased to have such a precious opportunity, we sincerely hope that everybody will improve through the sharing." During the Fa conference, practitioners also sent Mid-Autumn Festival greetings to compassionate Master Li.