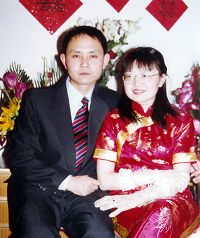 Mr. Cao graduated from the French Department of Beijing Foreign Language University. Ms. Yang Xiaojing and her husband have been married for nine years, but they have only been together for several weeks. Ms. Yang was sent to forced labor twice for a total of four years; Mr. Cao was sentenced to prison twice: once for four years, another for five years.

Ms. Yang graduated from Information System Department of Beijing Forestry University. She married Mr. Cao Dong on February 24, 2000. On March 5, 2000, Mr. Cao went back to his home in Qingyang City, Gansu Province to process his residential permit from Qingyang to Beijing. On thhise way back to Beijing, he was arrested with fellow practitioner Mr. Gao Feng on the train, and they were both detained for 17 days in a Drug Rehabilitation Center in the Inner-Mongolia Autonomous Region.

Ms. Yang's honeymoon was full of terror and worry. The CCP Secretary of her employer, Wang Xiuyan, tried to force her to write a guarantee statement to stop practicing Falun Gong many times and threatened her: The administration mandated that if there was one Falun Gong practitioner in the Institute that did not accept the brainwashing, the administrators' bonus pay would be gone, and all of the staff's bonuses and housing benefits would all be deducted. In order to avoid her employer and colleague being complicated by her beliefs, she was forced to quit her job. On October 1, 2000, the local police came to Ms. Yang's home and told the couple go to the police station. They refused, and they were forced to leave their home to avoid being arrested. From then on, they lost their home and did not have a source of income.

On May 21, 2001, Ms. Yang went back home to take a shower and was arrested by officer Wu Liya who had been waiting for her with other officers. They took her to a temporary brainwashing facility located in the Phoenix Hotel in Dongcheng District. Ms. Yang went on hunger strike for seven whole days to protest the persecution. The police took her to the Dongcheng District Detention Center. They saw that she refused to accept the brainwashing and were afraid she would go appeal for Falun Gong, so they sent her to the Fifth Ward of the Beijing Women's Labor Camp with an 18-month term. Warden Chen Aihua personally instructed prisoners to cruelly torture Ms. Yang, force her to stand a long time, not allow her to sleep, and give her bad food or water to drink. On May 12, 2002, CCTV broadcasted the fabricated incident of "Guan Shuyun killing her daughter" to defame Falun Gong. The Camp Administration started another round of severe torture of practitioners. Under the huge pressure, Ms. Yang accepted the brainwashing against her will.

After that, Ms. Yang suffered from an unclear mind, which lasted to 2003. She was released on November 30, 2002. At the end of December 2002, she had not fully recovered from the mental and physical torture, but she had to visit her husband who was in the Pingliang Prison in Gansu Province with a four and half year-term. She rented a room in Pingliang City for 11 months and endured many hardships.

In April 2004, six agents from Beijing's Yayun Village Police Station in Chaoyang District and officials from the Domestic Security Division of the Chaoyang District Police Department broke into Ms. Yang's parents' home. They ransacked it and also Ms. Yang's home. Ms. Yang was once again arrested and held in the First Division of the Beijing Women's Forced Labor Camp.

Ms. Yang Xiaojing experienced the brutality of the "Attack Ward" in February 2005. Starting at 5:00 a.m. she had to sit on a "high board" (a 60 centimeter or about 23.62 inches-tall square plastic stool). She could only sit on the side of it with her feet together. Her feet and legs had to be held together, or otherwise, she would be beaten. Her hands, with her fingers closed, had to rest on her thighs, and her eyes had to look straight ahead. If she closed her eyes or got sleepy, she would be beaten. She had to sit on the bench all day except for when she was eating. Some practitioners fell from the "high board" after sitting on it for several days. Their buttocks developed festers. During that period, their daily rations for each meal consisted of a scant portion of rice. Practitioners were forbidden to sleep until 12:00 a.m. Two inmates double-teamed a single practitioner in a cell, and several inmates took turns monitoring a practitioner. They recorded everything the practitioner did. They forced the practitioner to keep sitting on the "high board" until they had "reformed." The "Attack Ward" was not disbanded until August 2005.

In September 2005 the officials returned Ms. Yang Xiaojing to the First Ward. She was weak, but head Chen Li forced her to take on heavy-duty work that required her to have her head down for a long time, which resulted in severe neck pain.

In order to rescue Ms. Yang, on May 21, 2006, Mr. Cao Dong met with European Parliament Vice President Mr. Edward McMillan-Scott in Beijing on May 21, 2006. Mr. Cao informed Mr. McMillan-Scott of the brutal persecution suffered by himself, his wife, and other practitioners around him. Two hours after the meeting, Chinese Communist regime security agents arrested Mr. Cao and transported him back to his hometown in Gansu Province. Mr. Cao was sentenced to five years of imprisonment on February 8, 2007 and has since been detained at the Tianshui Prison in Gansu Province.

At the end of August 2006, Ms. Yang Xiaojing was released after being abused at the Beijing Women's Forced Labor Camp. She sought help in making her voice known to the public, but the Communist regime agents threatened her. Mr. Cao Dong was inhumanly tortured. He was secretly detained in Beijing for more than three months. During those days, his left eye became bloodshot due to being beaten and he was cuffed onto a chair for more than a dozen hours daily for one month, deprived his right to sleep, forced to watch loud slanderous videos, etc. Mr. Cao began vomit blood, passed blood, and fainted once, and he was rushed to the hospital three times. He was once taken to the Chaoyang District Brainwashing Center. In order to escape international condemnation, the police transferred Mr. Cao to be secretly detained in the Gansu Province State Security Department Detention Center at the beginning of September 2006.

The regime agents issued a formal arrest warrant on September 30, 2006 and delivered it to Mr. Cao Dong's parents in Qingyang City, Gansu Province, but Ms. Yang was not informed until the end of October 2006. To seek justice for her husband, Ms. Yang began to travel between Beijing, Lanzhou City, Pingliang City, and Qingyang City to look for a defense lawyer for her husband.

In February 2007 Mr. Cao was tried in Lanzhou City, Gaosu Province. The defense lawyer successfully argued for a reduction in criminal charges. The lawyer also agreed to continue to appeal for Mr. Cao. However, under the duress of National Security Bureau agents, the lawyer was afraid to mention the CCP harvesting living practitioners' organs during the second trial, which ended with a written statement in March 2007.

Ms. Yang saw her husband at the Tianshui Prison at the end of 2007. He described his ordeals to her during the brief visit, grieving her even more.

In December 2007, Ms. Yang went back to Beijing. On December 27, she went back home to pay the rent. Employees from the local Community Center who had been stationed outside her home reported her to the police. Policemen Liu Jiang and Liu Tao from the Jianguomen Police Station, Yang Zhongwen, director of the local 610 Office and another two policemen from the Dongcheng District Police Station broke into her home, forcibly carried her downstairs, and pushed her into a car. They drove her to the Dongzhimen Police Station. Section Chief Liu Yugang cruelly said, "We insisted on putting Cao Dong in a prison in Northwestern China while leaving you in Beijing." Afterwards, several plainclothes police carried Ms. Yang to a black car and took her to a hotel in the Liuliqiao area of Fengtai District and detained her there for a full day.

After being released, Ms. Yang found that her house key had been taken, and there were two vehicles parked under her parent's home building. She was once again forced into exile in the cold winter.

Ms. Yang heard the news about Mr. Yu Zhou and his wife Ms. Xu Na's arrest in February 2008. Mr. Yu Zhou died as a result of brutality in March, and Ms. Yang wept for her friend. The grief and pressure almost caused her to mentally collapse, and soon after she became physically weak. In July 2008, she developed lumps in her neck and underarms, which led to a diagnosis of lymphoma at the beginning of August 2008 at the Xijin Hospital in Xi'an City, Shaanxi Province. Ms. Yang lived in pain. She could not lie down normally, nor could she eat much.

Ms. Yang Xiaojing's elderly parents were worried about their daughter. Community Administration Office Head Li Heping often called to harass and monitor them. Agents came to their home to harass them on sensitive dates. Her 72-year-old father had to stay in Xi'an City and take care of his sick daughter. The old couple used their limited retirement funds to support Ms. Yang, who was struggling in extreme pain. Finally, she became jaundiced, her legs swelled, and her left breast developed lumps. She had not been able to lie down since July 2009. She died at 5 a.m. on October 1, 2009, in Xi'an City. 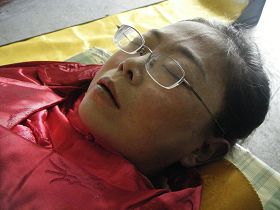 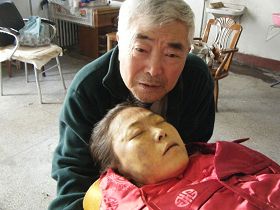 Her elderly father was heartbroken

At 5 p.m. on October 1, 2009, Ms. Yang's elderly father drove seven hours to rush to Tianshui Prison and begged the prison administration to allow Mr. Cao Dong to see his wife one last time. Wardens Zhou and Liu Jiangtao refused with the excuse that during the October First National Day vacation season, no administrators were present to make decision. They told the old man to wait until the vacation was over.