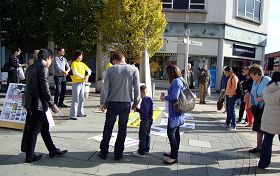 Falun Gong practitioners explaining the facts in the center of Sheffield 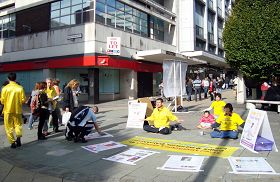 Not long after the information booth was set up, an older man full of energy, his finger pointing at a picture of the scarred body of a Falun Gong practitioner after being tortured, said with indignation, "Those who have done such a thing are bound to be punished! I am a retired soldier. If I see these evil people, I will take up a gun." He said that he would come back to sign the petition to protest the persecution. He added, "An army force should be sent to eliminate these crimes."

Two ladies that looked like mother and daughter asked in surprise, "How can this be? We thought that the Chinese Communist Party government had improved." A practitioner told them, "Not at all. During the Olympic Games and before October 1 (the country's 'National Day') they imprisoned even more Falun Gong practitioners. They have even removed practitioners' organs for sale while they were still alive." With indignation, they said, "That is going too far! What has our government done about this?"

The practitioner said, "The government of the UK has protected Falun Gong practitioners and granted us applications so that we can tell people the facts about Falun Gong being persecuted, but it hasn't done enough to stop the persecution. We are here not only to clarify the truth but also to collect signatures. We will then submit these signatures to the UK government, the United Nations, and other international organizations, calling for help to end the persecution by the CCP as soon as possible." In response, they said, "We will sign the petition" and they both signed.

An elegant middle aged lady read the display panels for quite a while. Pointing at the panels exposing the crimes committed by the CCP during its 60-year rule, including the destruction of Chinese traditional culture, the massacre of unarmed students, and the persecution of Falun Gong practitioners and other religious groups, she said to a practitioner, "I really don't understand why it (the CCP) does this." The practitioner responded, "It is because the nature of the Communist Party is against humanity." The woman said, "Yes, it is. I have already signed. I will help you and tell others about it. I wish you good luck."

By the end of the day, nearly 3000 leaflets, both in Chinese and English, had been distributed; about 200 signatures had been collected; and 71 Chinese people had been helped to quit the CCP and its affiliated organizations.