(Clearwisdom.net) Divine Performing Arts Touring Company staged its second show at the Brooklyn Academy of Music in New York on the evening of January 3, 2009. The curtain fell amid long, rousing applause from the audience. 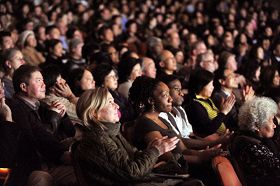 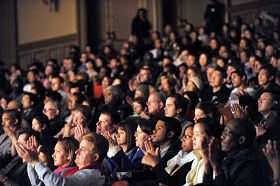 "This year is our family's Divine Performing Arts year," Adam said excitedly. Adam is a manager of a medium-sized construction company. He said that he enjoyed the show, because it was fantastic, brilliant, graceful, and intriguing. It had deep spiritual meaning and beautifully presented the Chinese culture. 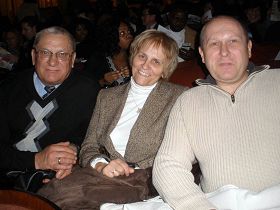 Adam brought his parents-in-law Zib and Lied, from Poland, to the show. He said, "We absolutely can't miss this opportunity today." He said that they had planned to attend the DPA show, and had known that DPA would perform in New York, New Jersey and many other places, but his parents-in-law's visas would expire on January 20th, and they could not wait for the show at Radio City Music Hall, so they came today.

Perhaps sensing the reporter's puzzlement because his wife was not present, Adam added happily, that they just had a baby, so his wife couldn't come, but she would come to the next show. He said, "We can't miss it!" 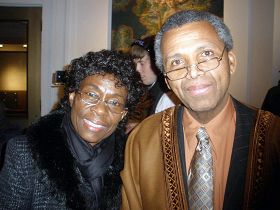 Dr. Reid is an official in the New York State health network. He and his wife were both impressed by the dance number "Heaven Awaits Us Despite Persecution." Mrs. Reid said that she gained more understanding of the Chinese Communist Party's persecution of Falun Gong through the performance. She said that she was sympathetic to Falun Gong practitioners, and thought that they should have freedom of belief. "Such an unfortunate thing must be stopped immediately," she said. Dr. Reid continued his wife's sentiments, saying that he felt gratified because they persist in their belief and are full of hope. 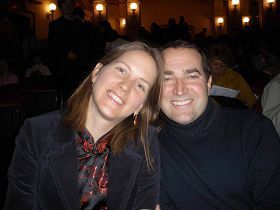 Lawyer Andrew and his wife Marty in Chinese costume

Andrew, a lawyer, and his wife Marty gave their impressions of the show, saying it was absolutely marvelous; its colors, dances, music and singing were flawless. They were particularly impressed by the piece "The Udumbara's Bloom," in which the artists' seamless synchronization and highly skilled dance performance were very impressive. They also liked the dance number "Welcoming Spring," which they found "awesome".

They both lauded the 3D animated backdrop designs. They thought that the diverse and vibrant colors were harmonious and coordinated well with the performers' costumes. The audience was naturally drawn into the stories being told.

The Divine Performing Arts Touring Company will head for Boston after completing their three shows in Brooklyn on the afternoon of January 4.