Montreal, Canada: Manufacturing VP, "Everyone Is Dancing in Unison ... Not Even a Millisecond Off!" (Photos)

The Divine Performing Arts (DPA) New York Company graced Montreal's Place des Arts Theater for the third time on the evening of January 17, 2009. Many people in the audience described the show as a "truly unforgettable experience."

"Everyone is Dancing in Unison ... Not Even a Millisecond Off!"

Alan, vice president of a manufacturing company, thought the show was spectacular. "It was very nice! The first half was just as good as the second half. The colors are very nice and so is the music. Very good." 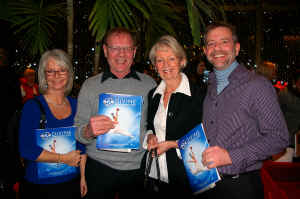 He said the dancing was "excellent" and the choreography was superb. "Everyone follows each other very nicely. Everyone is dancing in unison, not even a second off, not even a millisecond off! It's very, very good."

Allan was particularly drawn to the vibrant colors in the dancers' costumes. "I liked the costumes. What I liked about them most was how bright the colors were: bright orange and bright yellow, and bright greens and blues. It was very nice. The backdrop was nice, too."

He concluded by saying, "It is a very good show. Everyone is doing what they have to do and it's perfect! And the dance movements are perfect and everyone is together and the costumes are nice. It is very, very nice. Excellent!"

During intermission, Dennis Pfeffer, manager at a shipping company, told a reporter that it was the first time he had ever seen a DPA show and that before attending, he "didn't know what to expect." 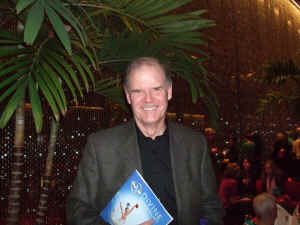 "I find it very nice to see the Chinese culture from the other side, so it's wonderful. I also enjoyed the colors of the costumes--beautiful!"

When asked what he learned from the show, he replied, "Different parts of China reflect different types of dance, which, to me, was surprising. Take Tibet for instance. I liked the delicacy of the dance. It's very gentle and it's also very powerful at the same time. I thought it was very, very well done. I have learned a lot today, so far. I look forward to the second part of the show."

Mr. Pfeffer said that seeing the DPA gave him a deeper appreciation of "cultures other than our own.

"And I think that dance is an excellent way to visit and see what other cultures are like. And for me, that's what I will take away from this show. I learned a lot more about the Chinese, just from the dance alone! So it's really excellent."

He said there were two parts of the show that he was particularly drawn to. "One, of course, was the last one. I think the energy of the Tibetan dance and the delicacy of the dance where they were all dressed in white--I don't remember the name of the dance--it is very delicate, it's pure ballet. As a matter of fact, that's what it is. It's a different form of ballet, very, very elegant very delicate, which I really appreciate."

He thought that the male and female dancers complemented each other very nicely. "The men, of course, bring the energy, but the women bring delicacy, and together they make for a perfect evening!"