On January 18, 2009, seats for the two Chinese New Year Spectacular shows in the Paramount Theater in Seattle were sold out. The Divine Performing Arts (DPA) received enthusiastic praise from the audience.

New Immigrant from China: The DPA truly promotes the Chinese Culture that can't be seen in China

Wang Fang just came to the United States a month ago. She and her husband Howie Paine believed they had seen true Chinese culture after the show.

"I learned some values of being a person and the meanings of why we came to this world," said Wang, "We need to return to our true selves." 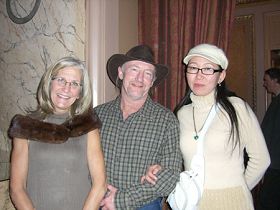 On the evening on January 18, Wang Fang (first right) watched the DPA's show in Seattle with her husband Howie Paine (middle)

The first program of the DPA's show is "The Five Millennia Begin" and the story takes place in a golden celestial world. The celestial beings follow the Lord Buddha to the human world and reincarnate into the Yellow Emperor and his officials. The human history thus began.

"I was impressed with the first program. I cried. I can't express how overwhelmed I was. I could feel there was a meaning behind why we came to this human world," said Wang, who was tearful as she spoke, "I am glad to see this show before the Chinese New Year."

Yang Fengjun, a retired psychologist, said, "It's mesmerizing. For me the music was only supposed to be heard in heaven and it is so precious to me that I can hear and see such a performance. It felt like God was here." 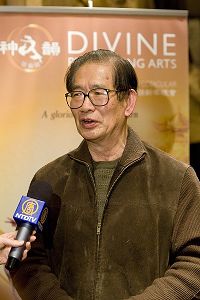 Mr. Yang used to believe in the divine until the Chinese Communist Party's (CCP) brainwashing led him to give up his belief. After seeing the show he said, "I felt like God had come to lead me to him." He also commented on the artistry, saying,"I felt I began to learn a little about art tonight. The DPA's artists are different from the ones I saw in China. The many artists on the stage gave me a feeling that they were actually one person. Their facial expressions were so compassionate that I was very moved."

"True bliss is peace, not struggling. Chinese people used to be kind, but the CCP corrupted them and twisted their minds."

"I study the human psyche. I see bad things in people that did not belong to them originally. Now that Falun Gong brings Truth-Compassion-Forbearance, it's marvelous to see the show today."

"This is the third time I have seen the show. I hope the DPA's artists can perform in China and save the people there."

"I never knew what being divine really meant, but now I do. It is Truth-Compassion-Forbearance and whoever is able to understand it can return to his or her true self."

Medical School Professor at the University of Washington: The DPA Conveys Bliss and Hope

Professor Colleen Catalano of the Medical School at the University of Washington thought the show was brilliant. She loved the music as well.

She said that she had always wanted to learn about Chinese culture. She loved the first program "The Five Millennia Begin" because it gave her a brand new experience with Chinese culture.

Professor Catalano believes the DPA conveys bliss and hope. She hoped the DPA could have more shows in Seattle. She said she would recommend the show to her students.