(Clearwisdom.net) On September 1, 2008, the 43rd Annual Labor Day parade was held in Naperville, Illinois, a suburb of Chicago. 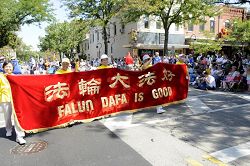 Falun Dafa in the parade. 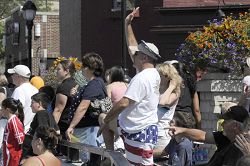 A spectator is learning the exercises 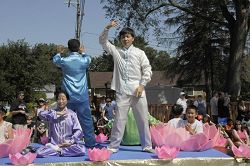 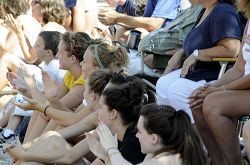 The annual Labor Day Parade is always well attended. This year, the theme of the parade was "Bring Back the Green Earth". Various groups participated in the parade including local government officials, media, marching bands, libraries and community organizations.

Falun Dafa was invited to participate in the parade for the fifth year. The Falun Dafa procession was led by three young ladies wearing celestial maiden costumes. They carried the words Truthfulness-Compassion-Forbearance in both English and Chinese. A beautifully decorated float followed, with practitioners demonstrating the exercises. A group of traditional Tang Dynasty drummer brought up the rear of the Falun Dafa procession.

The Labor Day Parade was broadcast live on local TV.