Germany: Mr. Liu Guangrong Fired from a Chinese-owned Company in Dusseldorf for Raising Awareness about the Persecution of Falun Gong (Photos)

Early in the morning on September 19, 2008, Liu Guangrong was on his way to the European Headquarters of Huawei Technologies in Dusseldorf. He was not going to work, because he had been dismissed by the company three days before. Why was he going to Huawei after he had already been dismissed? The story begins three days previously. 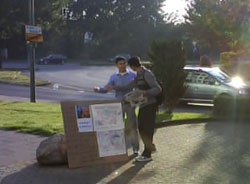 On September 16, 2008, the leader of the company went to see Mr. Liu and told him that he was dismissed because the company needed to reduce unnecessary employees. However, immediately afterwards, the company set out to recruit someone to fill Liu Guangrong's post, and it became obvious that Huawei's reason for releasing Mr. Liu was a pretext. So what was the real reason Liu Gangrong was dismissed? 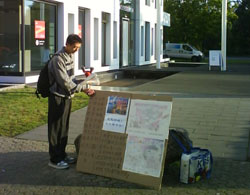 Liu Guangrong and his poster about quitting the CCP; Huawei headquarters is on the left side of the photograph

Two months ago, Liu Guangrong was hired to work at the European Headquarters of Huawei Technologies. Huawei is a well-known enterprise in the telecommunication industry, both at home and abroad. Its home office is in Shenzhen, China. Well paid by the company, Mr. Liu worked at the company's canteen, which served food to over 140 Chinese employees. Although well-known within the domestic telecommunications sector, the company was a great disappointment to Mr. Liu for its lack of freedom of speech. 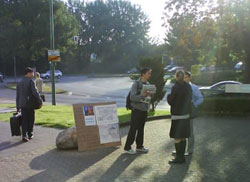 Liu Guangrong is a Falun Gong practitioner. He had suffered from neurasthenia since childhood. For more than a decade, both tinnitus and palpitations had been like shadows in his life, following him and making his life very difficult. He had tried to regain his health through running, shadow boxing, and taking Chinese medicine, but in vain. In 2001, Mr. Liu left China to work as a chef in Germany. Huge mental stress and hard physical labor made his neurasthenia even worse. In 2002, Falun Gong came into his life, bringing him much relief from his suffering. His neurasthenia, which had plagued him for years, disappeared, and he also became free of mental stress through practicing Falun Gong. From then on, he has often taken part in different activities to expose the Chinese Communist Party (CCP) persecution of Falun Gong. Mr. Liu said, "I hope that more and more people will no longer be deceived by the CCP's lies and will take a positive attitude toward Falun Gong as I do."

He worked very hard in the canteen at Huawei. He not only performed his own duties but also took the initiative to do the dirty, tiresome jobs that others did not want to do. His honesty and kindness were well-known to everyone that met him. A man of few words, he once said, "I just want to set high demands on myself with Truthfulness, Compassion and Forbearance."

Because so many higher-ups in China's telecommunications industry visit Huawei, Liu Guangrong distributed the overseas newspaper Epoch Times to them in his spare time. He eagerly wanted them to know about the persecution of Falun Gong taking place in China. However, Mr. Liu encountered all kinds of obstructions even though he was in Germany, a free and democratic society. It seemed to him that the company tried to maintain very strict control over the thoughts of its Chinese staff while making them work hard. The Chinese employees turned pale at the mention of the CCP persecution of Falun Gong, which was obviously a prohibited subject.

Mr. Liu once met a Chinese co-worker on the subway on his way to work. He told him about the persecution of Falun Gong and the Quit-the-CCP movement. The colleague immediately reported their conversation to Liu Guangrong's departmental chief. The chief told Mr. Liu, "You must not talk to the Chinese staff about Falun Gong and the Quit-the-CCP movement. Our company has regulations that do not allow the staff to talk about these sensitive topics. It will do you no good if you talk about these subjects."On another occasion, Mr. Liu placed an Epoch Times newspaper in a colleague's mailbox. When his boss heard about it, he said to him, "What you are doing will create a bad impression. Do you want to distribute the newspaper or do you want to keep your job?"

Even in the face of these threats, Liu Guangrong continued to do what he was doing. He said, "I don't think I have done anything wrong. In China, so many practitioners keep telling people the facts about Falun Gong in a peaceful way, although they risk losing their jobs and being arrested. Moreover, this is Germany."

On September 16, 2008, Huawei dismissed him. He says, "The company told me that it needed to lay off staff because there were too many employees. But the company recruited new employees to fill my post right away. It was obviously a pretext. I think that the real reason for my dismissal was because I talked to the staff about Falun Gong and the Quit-the-CCP movement in China."

Early in the morning three days later, Mr. Liu arrived at the European Headquarters of Huawei. In front of the building he set up a display board beside him. On the board, which he had made himself, was information exposing the evilness of the CCP and information about the Quitting the CCP movement.

Not long after, his former departmental chief appeared. Suddenly losing his good manners, he shouted at Mr. Liu, saying that he should not do that. But Liu Guangrong continued distributing the Epoch Times newspaper to both Chinese and German staff members. His former boss could no longer threaten Liu Guangrong with the loss of his job, so he threatened the other employees. Chinese employees on their way to work passed by Mr. Liu's display board, but when they saw the department chief standing beside the board saying in Chinese, "Do not take," most of them kept quiet and quickly walked away. Some of them returned the newspapers already in their hands, but others were able to steal a quick glance at the display board.Although the presence of the departmental chief kept Chinese employees from taking the materials, most of the Germans took the leaflets about Falun Gong and some gave Mr. Liu the thumbs up. In a touching gesture, after becoming aware of the truth of Falun Gong, a German gentleman went back into the building and came out again with a German lady, each of them with a cup of hot coffee for both Liu Guangrong and another Falun Gong practitioner.

When asked whether he was angry about his dismissal from the company and the way the company leaders had treated him, Mr. Liu said, "They, too, have been deceived by the CCP lies. We cultivate ourselves with Truthfulness-Compassion-Forbearance. We should not hate them. The reason why I clarify the truth to them is that I hope they will understand the truth, renounce the CCP, and have a happy future."

Falun Gong practitioners in overseas countries have been free to explain the truth, and there are few instances like Liu Guangrong's losing his job just for clarifying the truth. Mr. Guo, a practitioner who joined Mr. Liu to distribute leaflets about Falun Gong in front of Huawei headquarters, explained, "The CCP not only uses lies to control the ideology of the Chinese people at home but also spares no effort to extend its control to overseas countries. Huawei, the company where Liu Guangrong worked, has close relations with the CCP. What happened here should not have happened. In a free and democratic society, everyone would find it hard to believe that an employee would give up the right to freedom of information just because of threats from his or her employer."

Having been illegally arrested and detained in a forced labor camp in China for practicing Falun Gong, Mr. Guo maintained, "Although Huawei has done this out of fear of losing benefits because of offending the CCP, as an enterprise, especially as an enterprise registered in Germany, they have violated the freedom of speech of an employee. The company must be held responsible for this." Mr. Guo also expressed his hope that the mainstream media would expose how the CCP is exporting its despotism to free countries.