Editors' Note: In both Western and Chinese culture, the principle of karmic retribution, that is, being held ultimately accountable for one's own actions, is widely accepted. The fundamental teaching of Falun Gong is the characteristic of the universe, Truthfulness-Compassion-Forbearance. The universe will reward actions that are in harmony with this principle, while actions such as beating, torturing, and murdering people will incur karmic retribution. Stated another way, good deeds will be rewarded with good, while evildoings will meet due retribution. Articles such as this one are meant as a compassionate reminder of this principle to those who would commit wrongdoing. While many of those who persecute Falun Gong are merely "following orders," the universal law requires that they too be held responsible for their actions, and that only by reversing their course of wrongdoing may they escape retribution.

Luo Jing, 47, the anchorman and deputy director of the Chinese Communist Party's CCTV news department, was recently diagnosed with cancer. He is currently being treated in the chemotherapy unit of the Beijing Cancer Hospital. He was a delegate to the 17th National Congress.

At the beginning of the "June 4th Massacre" in 1989, CCTV news broadcasters were clearly supportive of the students. When the Chinese Communist Party (CCP) attacked students and civilians using armed forces, the broadcasters, including Luo Jing and Li Ruiying, wore black clothing in front of the camera, showing that they mourned the loss of life due to the suppression. However, after the CCP's purge of "disloyal" members, Luo Jing changed his tune. He turned around and began to support the Central Party Committee and its suppression of the "counter-revolutionary riot." 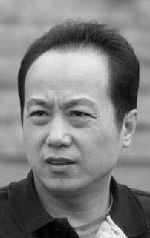 Life is precious but is full of hardship. To devote one's life to the CCP, unable to think independently or truly live one's own life, is sad and shameful. We hope that Luo Jing can recognize the damage that he has done to the Chinese people, thoroughly rectify his misdeeds, and redeem his life.