(Clearwisdom.net) On September 14, 2008, the Japan Center for Quitting the Chinese Communist Party (CCP) sponsored grand parades in Osaka and Kyoto to support the 43 million brave people who have withdrawn from the CCP and its affiliated organizations. The participants exposed the CCP's persecution of Falun Gong and other crimes it has committed, and called for a joint effort to disintegrate the CCP and put an end to the persecution.

The Divine Land Marching Band, composed of nearly a hundred Falun Gong practitioners, also participated in the parades. It was the band's first appearance in Osaka and Kyoto. The band's vigorous performance attracted many passersby who stopped and watched.

It happened to be a holiday in Japan that day, so there were a lot of local people and tourists on the streets in Osaka and Kyoto. Many people seemed amazed by the parade procession, and stopped walking to take photos with their cameras and cell phones. Some people asked for more information. 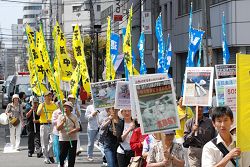 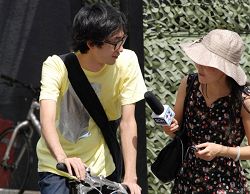 This Japanese man said he felt a strong energy 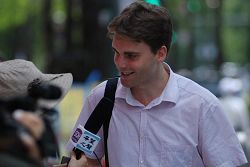 This westerner said, "You have a sense of justice." 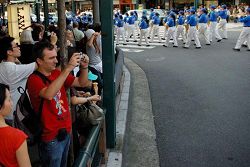 Tourists in Kyoto stop to watch the parade

During the parade, some enthusiastic passersby expressed their praise for the parade. A westerner told the reporter that "You have a sense of justice."

A Japanese man said that it is wrong that the CCP uses its power to persecute people.

Mr. Pu is an employee of a company. He droved over ten hours to take part in the parade. He told the reporter that the CCP's human rights abuses, particularly its persecution of Falun Gong still continues. Only by disintegrating the CCP can the persecution stops. The CCP not only persecutes its people inside China, but also has a bad influence on the world.