(Clearwisdom.net) To celebrate the 51st anniversary of Malaysia's independence, the Divine Land Marching Band held a three-hour parade in Pulau Ketam on August 31. Falun Gong practitioners passed out informational flyers along the parade route. For the citizens of Pulau Ketam, 900f whom are Chinese, it was a good opportunity to learn the facts about Falun Gong.

The band performed several songs in the parade. In front of the local police department, the band performed the national anthem of Malaysia--Negaraku. Their performances attracted a lot of spectators. 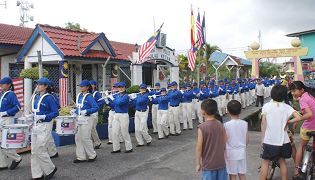 The parade went along most of the streets in Pulau Ketam. Although it rained slightly, many people watched the parade.