The 154-year-old "Keelung Chungyuan Ceremony" was held on the night of August 14 in Taiwan. It featured a grand parade and the launching of water lanterns. The large scale event started at 6:30 p.m. with many government representatives in attendance, including the Mayor of Keelung City, Chairman of the City Council, Director of the Port Authority and Representative of the Ministry of Transportation. President Ma Ying-jeou also sent a congratulatory letter to the event, praising the ceremony for displaying the special character of the founders. Besides the thousands of local residents packing the streets, many special guests also came, including the Ambassadors of Nicaragua, Mal bu, and Honduras, as well as a Congressman from the Philippines and the Deputy Mayor of Miaogelie City. 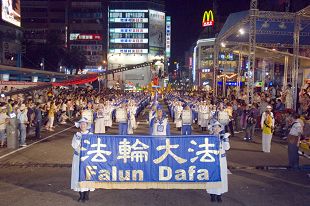 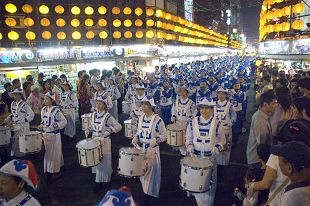 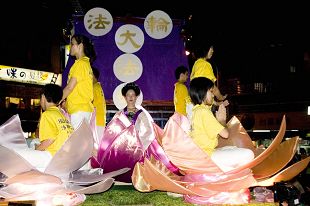 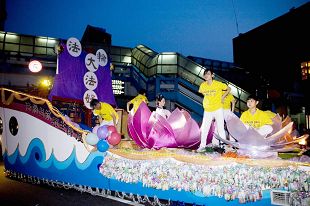 The Taiwan Falun Dafa Association was also invited to the event. The Falun Dafa Association provided a decorated float in the shape of "Fa Ship". There was a contingent of celestial maidens, the Divine Land Marching Band and another group of Falun Dafa practitioners. The solemn "Fa Ship" was appropriate to the setting of Keelung Harbor. The practitioners in celestial maiden costumes and in yellow exercise suits demonstrated the five sets of exercises on the float. Many spectators watched their movements closely and some began to imitate the gestures.

Falun Dafa practitioners prepared 10,000 paper lotus flowers all made by hand. The "Celestial Maidens" passed them to the people along the streets and the recipients were very happy to have the beautiful gifts. When the Falun Dafa procession passed the main platform, the guests and officials on the platform frequently nodded their heads and some raised their thumbs in praise.

The float was made and decorated in Danshui City. The practitioners overcame many difficulties and arrived in Keelung on the day of the parade after driving over local roads for three hours. The bumps on the trip damaged the bottom of the "ship" so the practitioners worked to repair it before the parade started. Finally, the "Fa Ship" sailed off toward thousands of waiting spectators.

Mom Chang is a practitioner in her 60's from Keelung City. She worked very hard to make the lotus flowers by hand. Even though the work was tiresome and took a long time, she said she was very happy to make the flowers and Falun Dafa bookmarks to promote Dafa.

Among the spectators stood Mr. Shu from Ai Er Road. Shu said the Taiwanese respect gods and Buddhas, in contrast to the Chinese Communist Party's atheism. He was very upset while talking about the CCP's organ harvesting crimes and the torture of Falun Gong practitioners in Mainland China.

Shu said he noticed the 180-member Divine Land Marching Band had marched and performed for three hours carrying heavy instruments, but everyone was still energetic. He took many photos of the parade and said he would share with friends and relatives that "Falun Dafa is great!"