Korea: Rally and March Held to Call for an End of the CCP's Persecution of Falun Gong (Photos)

On July 20, 2008, more than 600 Falun Gong practitioners and several Korean civil groups held a rally and march in the Jongmyo (Royal Shrine) Park, Jongno-Gu, Seoul, Korea to condemn the Chinese Communist Party's (CCP) persecution of Falun Gong and call for an end to the persecution.

On July 20, 1999, the CCP dictatorial regime headed by Jiang Zemin launched a nationwide persecution campaign against Falun Gong, which has persisted for nine years. More than 3,168 Falun Gong practitioners are verified to have died as a result of the persecution. According to internal sources, the actual death toll far exceeds this number. Tens of thousands of practitioners have been detained in prisons and forced labor camps, and locked up in mental hospitals, and many practitioners had their organs harvested when they were still alive.

Since the persecution began in 1999, on July 20 every year, Falun Gong practitioners from around the world have held large-scale rallies, marches, candlelight vigils and other activities to help more people learn about the CCP's evil deeds and work together to stop the persecution. Korean civil groups expressed their strong support for Falun Gong practitioners and said that only by disintegrating the CCP, can we ultimately put an end to the CCP's catastrophe to the Chinese nation. 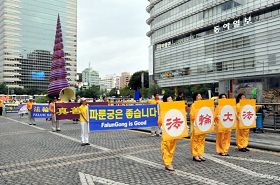 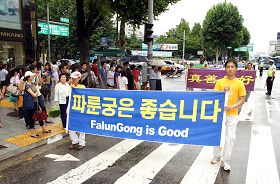 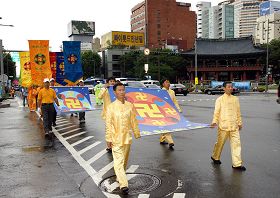 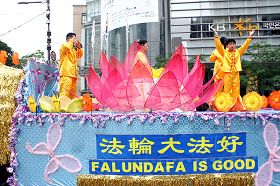 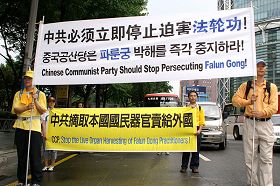 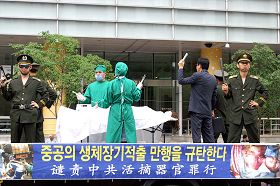 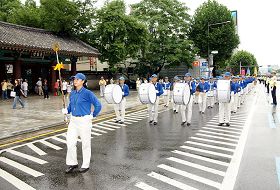 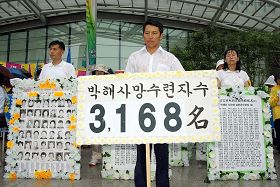 Choi Young Hoon: I Witnessed the Persecution of Cultivators

Choi Young Hoon, director of External Affairs at the North Korean Freedom Coalition, participated in the parade and rally. He said, "I helped North Korean refugees flee into China in 1997. The CCP arrested me in 2003, and put me in jail. I stayed in jail for three years and eleven months. While in jail, I met Falun Gong cultivators. I witnessed how the CCP brutally persecuted them. The CCP guards even intimidated me, and threatened to send me to North Korea, to shoot me, or send me to a place to bury me alive. The CCP guards forced me to take unknown drugs. I had a mental collapse, and didn't recover until I returned to Korea."

He said, "The CCP treated even me, a foreigner, this way. You can imagine how they persecute Falun Gong cultivators. The guards beat practitioners, sometimes the guards did not give them food, or deprived them of sleep. I witnessed all of this. They also sent Falun Gong cultivators to a secret concentration camp where no one knew what happened to them. Later I heard that the CCP harvested Falun Gong practitioners' organs when they were still alive. The persecution will still continue if the CCP is not disintegrated."

Mr. Choi Yong-ho, a representative from the Korean Freedom Youth Coalition, pointed out in his speech at the rally, "We love Chinese people, but oppose the CCP persecuting Falun Gong cultivators and North Korean refugees, and oppose the Olympic Games without human rights. We hope to put an end to the suppression of Falun Gong and the persecution of North Korean refugees in China soon. The suppression of Falun Gong has persisted for nine years, I'm very sad, and sincerely hope that the persecution will be ended soon."

Mr. Choi stressed that he will try his best to work for stopping the CCP from persecuting Chinese people soon.

. Sohn Jung-hoon, secretary general of the United Alliance of North Korean Refugees Association, and CIPFG Korea branch vice-chairman Zheng Qiuchen pointed out that they love the Chinese people, and that Falun Gong is a good practice benefiting people both physically and mentally. However, the CCP's suppression of Falun Gong is absolutely wrong, and human rights are universal values important to every one of us. They strongly condemned and called on the CCP regime to immediately stop trampling upon the human rights of Falun Gong practitioners, stop the forced deportations of North Korean refugees, and the persecution of Christians, Tibetan and other ethnic people.

They also called on all human rights groups and people of righteous minds to jointly work for putting an end to the CCP's terrorist acts.

The CCP's Malicious Actions are Determined by its Nature

Seeing the reenactment of harvesting organs from living practitioners in the parade procession, a 72-year-old Korean man said, "The CCP can do such a thing as harvesting organs from living practitioners, it is not an ordinary evil. As human beings, so long as they are instilled with communist thoughts, it is really hard for them to change their minds prior to their death. I witnessed this during the Korean War. They were so inhumane that they could even betray their friends. This is determined by its nature. Only by disintegrating the CCP can people enjoy freedom."

Korean Falun Dafa Association spokesperson Wu Shilie said in an interview that prior to the CCP's persecution in 1999, few people practiced Falun Gong in Korea. Now, there are over 200 practice sites, at a conservative estimate, and 50,000 copies of the book Zhuan Falun in Korean have been sold.

Falun Dafa, (also called Falun Gong), which is guided by the principle Truthfulness-Compassion-Forbearance, was first introduced to the public by Mr. Li Hongzhi in 1992. It has been spread to over 80 countries. As of today, the primary book of Falun Dafa, Zhuan Falun, has been translated into over 30 languages, and published and circulated in many countries.

According to incomplete statistics, as of mid-February 2004, proclamations and statements of appreciation for Falun Dafa and its founder issued by government organizations, congressmen, groups and organizations have reached 1223, among which 1050 are in the USA, 135 in Canada, 12 in Australia, and 9 in Taiwan.