The "Million Signatures Global Campaign" is a movement initiated by the Coalition to Investigate the Persecution of Falun Gong (CIPFG) to call upon the Beijing authorities to stop the persecution against Falun Gong before the 2008 Olympic Games. German Falun Gong practitioners held a Falun Gong Information Day on Saturday, July 12 in Titisee, a famous scenic spot in the Black Forest, to expose the evil nature of the Chinese regime and collect signatures to support the movement to end the persecution. 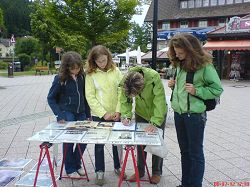 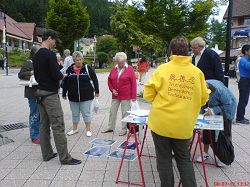 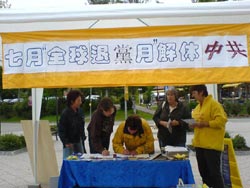 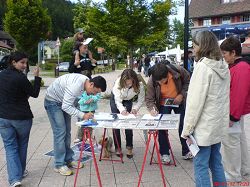 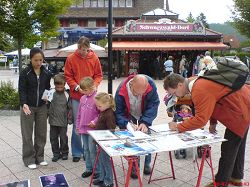 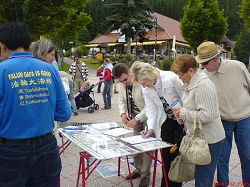 Tourists from various countries sign their names to call upon the Chinese communist regime to stop the persecution of Falun Gong.

As it was Saturday, tourists kept pouring in. The practitioners' information booth was set up near the main entrance so as to attract attention from passersby. Many people stopped to view the information boards. A lot of them were shocked by the photos of the ruthless persecution that the Chinese police had inflicted upon Falun Gong practitioners. Some could not believe this had truly happened. A five- or six-year-old young girl held her mother's hand tightly and asked, "How could this happen? Why are people killed because of this?" After realizing the facts and that the persecution is still happening, people signed their names to support Falun Gong's appeal to stop the persecution.

A German visitor told practitioners, "We have been seeing more and more news in the German media about the persecution of Falun Gong in China."

A German college student asked why some of his Chinese classmates refused to accept the truth and held erroneous notions about the Chinese authorities. Practitioners told him that his Chinese classmates grew up in an environment dominated by the culture of the Chinese Communist Party (CCP) and they were deceived by the CCP such that they didn't have any opportunity or became reluctant to recognize the truth. However, as they are now studying in foreign countries, they can see Falun Gong's widespread popularity, the overwhelming atmosphere of protesting against the brutal persecution and the support from all walks of life around the world. As long as they think it through, they would understand the truth.

Some visitors from France, United Kingdom and Sweden said they knew Falun Gong is an upstanding group of people and that the so-called "Tiananmen Square self-immolation" was a propaganda stunt staged to turn public opinion against Falun Gong. However, none of them had heard about the CCP's crime of harvesting the organs of Falun Gong practitioners. They said everyone in the world must put this evil persecution to a complete stop so that human rights can be safeguarded. A tourist commented, "Our government should do something about this!"

Several Chinese tourist groups arrived in the afternoon. They could see the information booth from afar. While walking along with the groups, some of them stared at the banners and information boards. Practitioners offered them materials and said in a gentle tone, "This is good for you. Please take one and read it." A lot of Chinese tourists quietly accepted the material with gratitude. One did not take the material at the very beginning, but he came back to the practitioner soon, saying, "I'll take a copy." An older gentleman raised his thumb to practitioners several times. When asked whether he had quit the Chinese Communist Party, he smiled and said, "Yes." Some Chinese visitors took photos of the practitioners' information booth.