Jin Youfeng was formerly a physical education teacher at the Mudanjiang Normal College in Heilongjiang Province. In September 1999, he was fired because of his belief in Falun Gong. Later he was sentenced to three years of forced labor. In the labor camp, he was badly beaten by Zhang Junrong, a division head of the Admission Section of the camp. On October 22, 2003, he was arrested again. In March 2004, he was sent to Mudanjiang Prison, where he was badly tortured. He was sentenced to 11 years in prison. On May 26, 2006, Jin was locked to iron bars by Luan Yu, a prison guard.

1. Beaten by a guard in the labor camp

In September 1999, Jin Youfeng was fired and given a three-year sentence in the labor camp, because he went to appeal for Falun Gong. His wife Jiang Chunmei, a Falun Gong practitioner and an English teacher at Mudanjiang Normal College, has also been arrested and jailed several times. Their seven-year-old son was taken care of by their friends.

Jiang Chunmei, Jin's wife, was fired from her job. In 2001, she got her job back, but did not get paid for several months. The same thing happened to Liu Zhiyuan, another Falun Gong practitioner at Mudanjiang Normal College.

2. Jiang Chunmei was arrested during her nursing period

On October 22, 2003, policemen broke into Jin's house and took Jin and Jiang away. More than 70 practitioners were arrested that same night. Their houses were searched and their Falun Gong materials, computers, and cash were taken away. In the police station, the practitioners were badly tortured. Policemen beat them, didn't allow them to sleep, poured spicy powder into their noses and hung them up. The practitioners were tortured for 10 days.

Jiang Chunmei's baby, Jin Panpan, was 14 months old, and needed to be nursed. Jiang's 75-year-old mother had taken care of Jin Panpan and 10-year-old Jin Luyi. On November 26, Jiang was sent to the Second Detention Center of Mudanjiang by officers from the Xingping Road Police Station. Her children were sent to her relatives. 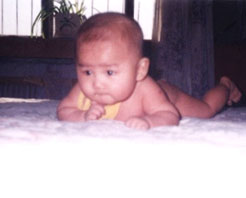 When Jin Panpan was 18 months old, on February 14, 2004, Jin Youfeng was sentenced to 11 years in prison and Jiang Chunmei was sentenced to 14 years. On the same day, more than 30 Falun Gong practitioners were given sentences ranging from 5-14 years. At the trial, practitioners exposed the torture they experienced in the detention center. All of them refused to sign any documents.

When arresting Jin and Jiang, the policemen forced their relatives to take away their children, and threatened that if they didn't take the children, the children would be sent to an orphanage.

The children were sent to Jiang's parents in Qiqihar. The grandparents live on collecting recyclable materials and live a very poor life.

3. Jin was tortured in the prison

In March 2004, Jin was sent to Mudanjiang Prison. Policemen took away all of his personal belongings and only left him one set of clothes. He could not brush his teeth or take a shower for several months. Zhou Shaokun, a worker at the prison, was one of the people who badly tortured Falun Gong practitioners.

Practitioners were forced to do heavy labor during the day, and sometimes even after dinner. Once when Jin didn't finish his assignment, he was tortured. He was forced to bend over with his arms pointing up. Normally, one cannot hold this position for more than 20 minutes. When Jin was forced to stay in that position, Zhou Shaokun and Liu Daqing, a guard, beat him. Policeman Hong Tao also beat him badly.

On September 4, 2004, the prison started a series of intensive torture, trying to force practitioners to give up Falun Gong. They separated the practitioners and didn't allow them to sleep. Practitioners Liu Jun and Wu Yuerong were jailed separately. Several criminals talked to Liu and Wu constantly, trying to convince them to give up Falun Gong. Liu was forced to stand all night, and was forced to stand on a chair for four days. The guards claimed that they would do the same thing to every practitioner. In order to stop the torture, on September 9, practitioners started a hunger strike. On the second day of the hunger strike, practitioners Jin Youfeng, Gao Yunxiang and Guan Lianbin were put in solitary confinement. Guards put 38-pound shackles on them. Their hands and feet were locked to a bar for 15 days.

On the second day, Jin was force-fed. It was not for the purpose of supplying nutrition, but purely a means of torture. The food sometimes went into his lungs. The food consisted of corn cereal and spicy powder, and often gave people diarrhea. On the third day, a guard who calls himself "the king of all evil" came with several criminals. They held Jin's head and forcefully poured a lot of water into his mouth. It was cold in the solitary confinement cell. There was no bedding and Jin only had very thin clothes.

One night, on his way to the bathroom, guards ordered several criminals to beat Jin badly.

Jin was held in the intensive-training division for 14 months.

On May 26, 2005, Jin and other practitioners were sent to the Seventh Ward of the prison. The practitioners refused to do the heavy labor. Jin was locked to the iron bar of a window for a morning. On the morning of May 27, he was locked up again. In the afternoon, division chief Zhu Zailiang asked guards to hang up Jin with one arm locked to a bar. On May 28, Zhu ordered criminals Han Baoren, Dai Qingmin, Liu Yong and Su Yuming to torture Jin and force him to give up Falun Gong. Since Jin refused to do so, Zhu cursed the criminals and told them that if they could not make Jin give up the practice, then their sentences would not be reduced. Under pressure from Zhu, the criminals took Jin to the bathroom and beat him severely. Later, they assigned Liu Yong to watch and keep torturing Jin. Jin was not allowed to sit down.

4. Jin refused to give up his belief and was denied medical treatment

Due to the torture and harsh environment in the prison, Jin developed lung disease and lost part of his hearing. He didn't get adequate treatment in the prison and became very weak. In August 2007, he was sent to the hospital by officers of Xianglun Police Station. The police tried to force him to sign guarantee statements promising to give up Falun Gong. He refused, so the police took him out of the hospital and sent him back to the prison, despite the fact that he was dying.

Practitioners who have been tortured to death in Mudanjiang Prison before Jin was sent to the hospital include: Pan Xingfu (31, former employee of Shuangyashan Electric Communications Bureau); Wei Xiaodong (34, former teacher at Bayi Farm College in Heilongjiang); Ning Jun (50, from Xi'an District in Mudanjiang); Wang Jiguo (40, employee of Mudanjiang Normal College); Li Ruqing (66, from Shuangyashan); Du Shiliang (50, from Hailin); Yu Junxiu (from Zhejiang Province); Zhang Hongquan (an engineer at Daqing Oil Field); Kong Xiangzhu (39, from Jianshan District of Shuangyashan); Wu Yueqing, (30, from Shuangyashan). Pan Xingfu, Ning Jun, Kong Xiangzhu and Wu Yueqing passed away after being released from the prison.