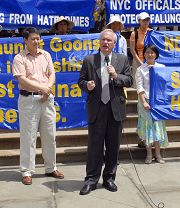 New York City Councilman Tony Avella said such personal attacks of Falun Gong practitioners was intolerable in the U.S. where there is freedom of speech, faith and assembly 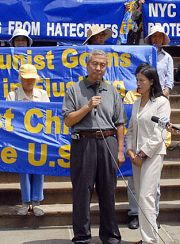 Mr. Wang Zhiyuan, representative of the World Organization to Investigate the Persecution of Falun Gong (WOIPFG), announces most recent findings of investigation

Falun Gong practitioner Judy Chen and Yu Wenzhong told their experiences of being assaulted and threatened on May 19 and May 20. The police arrested twelve attackers, and some have been convicted, while others are still in legal proceedings.

Falun Gong practitioner Zenon said the number of mobsters and the time span of the violence in Flushing and other Chinatowns in New York indicated that the CCP was attempting to suppress Falun Gong overseas.

Mr. Wang Zhiyuan, representative of the World Organization to Investigate the Persecution of Falun Gong (WOIPFG), announced the most recent findings of an investigation, "The whole incident in Flushing has nothing to do with the Sichuan earthquake or earthquake relief, and that incident was not initiated by local residents spontaneously. Instead, this incident was controlled by the CCP and was orchestrated by and it directly involved the Chinese Consulate in New York. The Consulate was instrumental in attempting to suppress Falun Gong overseas. However, it also exposed the overseas Chinese community system that the CCP has taken great pains to build up." Wang said the CCP used the "unrestricted warfare" strategy in Flushing. They hired hugs as attackers. After more than ten of them were arrested, the CCP agents were directly involved. Following them were the CCP-loyal Chinese-American councilpersons. This net of connections built by the CCP are not in place only to deal with Falun Gong. Therefore, we called on all governments to pay special attention.

New York City Councilman Tony Avella attended the press conference and gave a speech. He said such personal attacks of Falun Gong practitioners was intolerable in the U.S. where there is freedom of speech, faith and assembly. Some mobsters have been sued in court. Councilman Avella made a council proposal to condemn the assaults of Falun Gong practitioners in Flushing and other places, and call for the FBI and U.S. government organizations to investigate the intervention by the Chinese Consulate General regarding the Flushing incident. If the Chinese government is proved to have been involved in, encouraged or supported the assaults in any format, these people could be expelled from the U.S. Foreign governments are not allowed to intervene in the freedom of our people.

Mr. Gao Dawei, representative of the Service Center for Quitting the CCP, said, "The violent attack in Flushing targeted the activity of quitting the CCP. However, we received more and more phone calls from the Chinese people condemning the mobsters and requesting to quit the CCP. Some people from the earthquake area said that if they dared to say 'Long live the CCP' in the earthquake disaster area, they would have been crushed. We will persist in helping people quit the CCP."

Falun Gong practitioner Zhang Erping said that the CCP are escalating the persecution of Falun Gong on the eve of the Olympic Games, and at least one thousand seven hundred and ninety Falun Gong practitioners have been arrested between December and May. The number climbed to one thousand eight hundred and ten in June. Mr. Zhang submitted appeal letters to the Mayor of New York and the City Council Speaker's Office.

Many government officials and the general public stopped to watch the press conference. Jisela Romus, an intern at the Council Office learned about the CCP's persecution of Falun Gong practitioners for the first time. She was surprised that some councilmen like John Liu spoke for the CCP. She said it was very unfair and shouldn't continue.