(Clearwisdom.net) On the afternoon of June 21, 2008, Falun Gong practitioners in England held a truth-clarification activity in central London, strongly protesting the attacks on Falun Gong practitioners and volunteers at the Service Center for Quitting the CCP in Flushing, New York. They made public the Chinese Communist Party (CCP)'s lies and deceptions and called on overseas Chinese to quickly learn the truth and quit the CCP and its affiliated organizations. 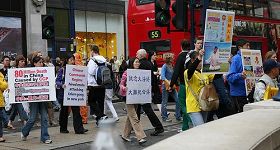 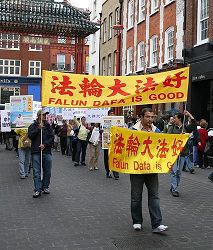 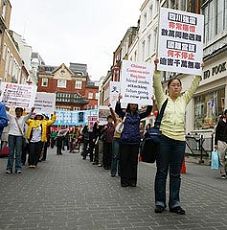 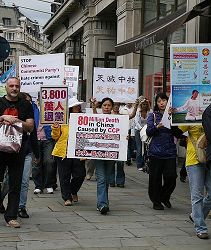 Since May 17, the CCP has been inciting overseas spy organizations and mobs to attack Falun Gong practitioners and volunteers at the Service Center for Quitting the CCP in Flushing, New York. At the same time, the CCP-controlled overseas Chinese media has been spreading lies and distorting the facts to falsely accuse Falun Gong and incite hatred of Falun Gong. The violent attacks have already captured the attention of American police and related government departments. The CCP's lies and slander have also spread to other countries, including England, misleading some overseas Chinese people.

To give more people an opportunity to understand the truth of Falun Gong and to enable Chinese people in London to avoid becoming victims of the CCP's deceptions, practitioners in England held truth-clarification banners and posters and marched through the streets of central London and Chinatown. They started across from the Chinese Embassy in London, calmly walked along the sidewalk, marched through the busy London commercial center Oxford street, and passed by crowded Piccadilly and Leicester Square and Chinatown. They marched down Chinatown's main street and its surrounding streets three times. The march concluded at St. Martin's public arena. The march was followed by truth-clarification, distribution of flyers, and the collection of signatures opposing the persecution.

Practitioners used eye-catching banners and posters in both Chinese and English, proclaiming "Falun Dafa is good," "Falun Dafa Truth-Compassion-Tolerance," "Strongly protest the CCP inciting hatred of and attacks on Falun Gong in New York," "Stop the CCP from using overseas accomplices to attack Falun Gong," and "The CCP concealed earthquake predictions--Ten thousand young students died in the earthquake as a result," "China's 5000 years of divine culture--The CCP's 50 years of despotic rule. Loving the country is not the same as loving the CCP. The CCP is not China," "CCP = Violence + Lies," "CCP = 80 million people dead," "38 Million people have quit the CCP," "Heaven destroys the CCP. Heaven protects China," "Heaven is eliminating the CCP, withdraw from it for a safe future," "Calling on overseas Chinese to understand the truth and quit the CCP."

The parade of practitioners on Saturday in London drew the attention of many pedestrians, and many people accepted flyers. Some watched the parade from across the road, and several took out their cameras to photograph the march. In Chinatown, the march drew the attention of tourists on the street as well as those inside the shops. When they saw the truth-clarification messages, many Chinese people looked surprised. People read the posters and banners carefully and began to understand the CCP's crimes and its extension of violence and lies overseas.

Ms. Chen, a volunteer at the Service Center for Quitting the CCP in London, held a poster reading "Heaven destroys the CCP. Heaven protects China." She said, "The reason I hold this poster board up high is because I want more people to see it clearly. When I hand out flyers in Chinatown I often encounter people deeply poisoned by the CCP's lies. Because they confuse the CCP with China, if you tell the person that the CCP is bad, the person things you are saying that China is bad. The eight Chinese characters on this poster enable people to see the truth clearly at a glance. They will differentiate China from the CCP. Only after the CCP is eliminated can there be a China with a good future. Today we have brought out all these truth-clarification messages and marched around Chinatown a few times. Many people are touched and have accepted the truth-clarification materials. The effect of such an event is truly good and can help people recognize the false nature of the CCP. I think that we should have activities like this often."

Ms. Liu brought her grandson to participate in the march. She often explains the facts in Chinatown, and is a volunteer at the Service Center for Quitting the CCP. When handing out truth-clarification materials in Chinatown, she has encountered some Chinese people who were misled by the CCP's propaganda. They insulted her and even threatened to beat her up. She believes that the Flushing incident was a last-ditch struggle of the CCP. Asked about the march, she said, "You can see from the expressions of the Chinese people. They admire the righteousness of Falun Gong. Their eyes are full of sympathy and support."

On the streets of London, Mr. Hou, a volunteer at the Cambridge Service Center for Quitting the CCP, carried a poster board that was worded, Nine Commentaries on the Communist Party. He said, "I want to support the Flushing Service Center for Quitting the CCP. The CCP tries to stir up hatred everywhere. Since November 2004 when the Nine Commentaries was published, more than 38 million people have quit the CCP and its affiliated organizations. This movement is awakening the spirits of the Chinese people. I feel it is very good."

Talking of the significance of the truth-clarification activities, Mr. Zhu, a volunteer from the England Service Center for Quitting the CCP, said, "We are calling on Chinese people to quit the CCP, because it is very important for them. Quitting the CCP signifies the awakening of Chinese people's spirits. It means that they clearly recognize the evil nature of the CCP and that they have made the right decision. The CCP has held power for over 50 years. It has initiated inhuman political movements again and again, which led to the unnatural deaths of 80 million innocent Chinese. Even today there are some people who are still unaware of the evil nature of the CCP." Mr. Zhu, who personally experienced the Flushing violence in America, continued, "I must stand up to protest the CCP's inciting of hatred and attacks against Falun Gong practitioners and support the Flushing Service Center for Quitting the CCP. The Flushing incident was masterminded by the CCP. Those mobs did not know what they were doing. The CCP has deceived the Chinese people for many years. Some people still believe the CCP's fabrications and lies. For personal interest they attack kind and peaceful Falun Gong practitioners. I really feel they are very pitiable. We must put more effort into truth-clarification to have more Chinese people know the facts."

A woman practitioner of Iranian descent named Aruisong told the reporter, "It seems as if everyone here is waiting for this moment. The CCP has been instilling terror into the hearts of Chinese people. But everyone wants freedom from within. They have discovered that Falun Gong practitioners have said the words they do not dare to say."

English practitioner Robert, who began practicing Falun Gong only a few months ago, participated in the march. Asked about his feelings, he said, "It was the first time I have marched in Chinatown with Falun Gong practitioners. I am very proud. I think it is very important for us to spread the information calling for an end to the CCP's persecution of Falun Gong. At the beginning of the march, I carried a banner worded 'Falun Dafa Is Good' at the front of the procession. I saw that many people stopped and showed interest. I am very happy that I did not see any negative responses from Chinese people. Of course, a small number of people did not accept flyers."

English practitioner Zek, who distributed truth-clarification flyers to the spectators, said that he thought the event was very good. He said that, compared to before, more people were praising Falun Gong practitioners with thumbs up, and the Chinese people appeared to be very friendly and even smiling. "I told Chinese people, 'If you are really concerned about China and Chinese people, then you should quit the CCP because the CCP is from the west.' A lot of Chinese people responded by saying that they knew." His wife, Misha, also handed out truth-clarification materials to people on the street. Last month Misha had an unhappy experience in Flushing. When handing out copies of The Epoch Times newspaper, she was assaulted by a rude person. "They were terrible, just like thugs. It occurred in America, a democratic country." This experience made Misha understand the importance of exposing the CCP's lies on a large scale, "It is important that people see the messages on our truth-clarification boards."

Actually, the Flushing incident allowed people to understand the violent and deceitful nature of the CCP. In St. Martin's public arena, many people took the initiative to sign their names on the petition opposing the persecution. Mr. Noer from Ireland was one of them. When a practitioner told him about the Flushing incident, he was astonished. He thought that America, as a model of democracy all over the world, shouldn't tolerate such violence. Mr. Noer worked in Amnesty International's Hong Kong department and went to China several times. He said that the CCP is actually nothing to be afraid of because its rule is based on lies. "Just like a castle built on sand, it is in imminent danger."

When the event came to a close, an older overseas Chinese who had been paying close attention to and supporting the practitioners' truth-clarification efforts said, "You should hold this sort of activity every day. It is very good!"