On March 13, 2008, 610 Office personnel in Mazhang District, Zhanjiang City, Guangdong Province, took Ms. Zeng Xiumei to a brainwashing center in Chikan District, Zhanjiang City. They also took her young son, traumatizing him mentally and physically. Ms. Zeng was sent to the Hainan Province General Bureau Forced Labor Camp, where she was beaten and force-fed. She was beaten black and purple, and one of her lungs was badly damaged. On April 30, Zeng Xiumei, who by then was just skin and bones, was released. The police dropped her off at the curb and quickly left.

CCP personnel detained Zeng Xiumei and her son and tried to forced her to give up her belief in Dafa and Master. Zeng Xiumei refused to cooperate. When they saw they could not "transform" her, they transferred her to the Hainan Province General Bureau Forced Labor Camp. Her son was released and her husband took him home.

CCP personnel instructed "teaching assistants" to bombard Falun Gong practitioners with a teaching called "The Sutra of Ti-tsang Bodhisattva" and to read it to them every day. The assistants quoted out of context to suit their purposes and twisted Dafa principles, attacked Dafa, and pressured Zeng Xiumei to give in. Because she did not yield to them, they hit her on her head, eyes, face, and chest every day with Dafa books, and fiercely kicked her legs. She was beaten until she was black all over. They feared her blackened wounds would attract attention, so they stated that she had bad blood circulation.

Ms. Zeng went on a hunger strike for about 10 days and was force-fed. Her lungs were damaged in the process, and she had a fever as high as 42 degrees centigrade. On April 9, she was taken to the Hainan Province Frontier Defense Hospital, which is affiliated with the Chinese People's Armed Police Force. The X-ray report regarding the extent of Zeng Xiumei's injuries is below: 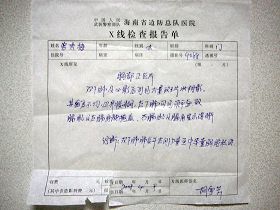 Diagnosis: Lung infection. Left side of the chest has small to middle amount of pleural effusion.

The "teaching assistants" went to the hospital to tell Zeng Xiumei that Dafa was bad and told her not to practice. She disregarded them. They kept watch at her door in turns 24 hours a day.

Ms. Zeng Xiumei knew that the purpose of treatment was to continue to persecute her, so she refused to cooperate and pulled out the needle for the drip, refusing all medicine. They tied up her hands and feet and abused her brutally.

Zeng Xiumei was tortured until she was skin and bones and could not talk. When they realized that she was on the verge of death, they released her on April 30. They did not dare to take her to her doorway, so they pulled her out of the car and drove off. They were afraid her family would recognized them and hold them responsible.

Before the persecution, Ms. Zeng weighed over 40 kg but now weighs only 20 kg. The CCP squanders untold human resources to persecute Falun Gong practitioners. Zeng Xiumei was detained for over two months, and was beaten and injured. The nation also lost money--as much as 26,800 yuan--on her medical treatment.