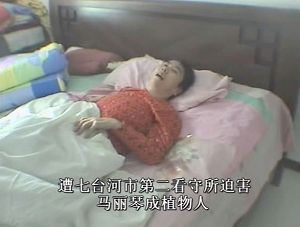 [Host] Welcome to Clearwisdom Focus! Since July 20, 1999, Heilongjiang Province has been one of the worst regions in China in terms of the persecution of Falun Gong practitioners. Many practitioners have been sentenced to prisons and forced labor camps in this region. Almost all departments in detention centers, labor camps, prisons, and police stations collect evidence using force (illegal search and seizure), and "transform" practitioners with violence. Among these practitioners, many are women or elderly. The degree of cruelty is unthinkable. Let us examine two cases today.

[Journalist] This rosy cheeked lady is Ms. Ma Liqin, 47, an early retired employee from the 204 [Petroleum] Detection Branch in Qitaihe City. She had previously been depressed after her divorce, and was very weak and sickly. But after she started practicing Falun Gong, her body was purified, and she became open and happy. Through practicing Falun Gong she learned to cherish her life.

In March 2003, lead officer Yin Zhongliang, from the Qitaihe City Second Detention Center, beat Ms. Ma Liqin so badly that she is now in a persistent vegetative state. She eats only when fed, is incontinent, and her family needs to care for her around the clock. Her pension is being used to pay her medical bills.

[Host] According to a Clearwisdom website report, dated March 5, 2002, Ms. Ma was arrested by a policeman from the Dongfeng Police Station, Qin Yong, and sent to the Beishan No. 2 Detention Center.

On March 15, 2002, Ma Liqin was dragged by head policeman Yin Zhongliang into the office and beaten. Yin kicked her with heavy shoes, and knocked her head against the wall. She lost consciousness immediately. The police thought she was faking it and kept punching her in the face. They used a needle to prick her right hand, and put pills in her mouth to revive her. When they found that Ms. Ma was not responding, no matter what they did, Yin ordered someone to carry her to a car. At this time, they found that she had become completely incontinent, and her pants were wet.

[Journalist] The CT exam revealed significant bleeding in her brain, and her face had a large area of hematoma. Her head, back, legs, feet and hands all had apparent trauma. During open skull surgery, the doctor took out 70 milliliters of coagulated blood, but some could not be removed (see video of Ms. Ma Liqin lying in bed).

[Host] Ms. Ma remains in a vegetative state. No one can pay her medical bills. Her family appealed many times, seeking justice and compensation. They appealed to the city government, the petition office, the Procuratorate, the Heilongjiang Public Security Bureau, and the Heilongjiang Procuratorate, but all of their efforts have been in vain. After her case was exposed on the Internet, the Qitaihe Public Security Bureau declared an "investigative conclusion" on March 20, 2003, which claimed that, "There is no proof that Ma Liqin's cerebral hemorrhage was caused by a police beating." The police agreed, however, to pay part of her medical bills. It is costing a lot to keep Ms. Ma in the hospital, and the authorities agreed to pay 30,000 yuan towards these costs. For this, they required Ms. Ma's son, Zhang Kai, to no longer appeal, or he would face prosecution.

[Host] Now let us look at the second case: Ms. Yu Fengchun Dies as a Result of Persecution in Shuangyashan City, Heilongjiang Province

Ms. Yu Fengchun previously had ascites due to cirrhosis, before she practiced Falun Dafa. She became very healthy from practicing Falun Gong and her illnesses disappeared. Because she firmly kept her faith in Truthfulness-Benevolence-Forbearance when the persecution began, she was arrested six times, and detained and harassed multiple times.

[Journalist] During her detention, Ms. Yu's former illness recurred, and she died on December 27, 2007, at age 43. Below is her testimony of the brutal mistreatment she received before her death.

[Yu Fengchun] I used to be in poor health, but became healthy after practicing Falun Dafa. During the persecution, I was arrested six times and detained and harassed multiple times, and I was forced to serve one year of forced labor. Officers from the Lingdong District Police Department extorted three thousand yuan from me. During detention, I was shocked with electric batons, beaten with sticks, and brutally force-fed. Each time I was abused, my mind and body were in extreme pain. My family was also in great terror.

[Journalist] This is a hand-written receipt from the local police listing their extortion.

[Host] According to the Clearwisdom website's incomplete statistics, under Jiang Zemin's cruel persecution policy of "Defame their reputation, bankrupt them financially, and destroy them physically," more than 400 Falun Gong practitioners have died in Heilongjiang Province as result of the persecution, which is the most in the entire nation. This persecution is a systematic genocide of Falun Gong practitioners by Jiang and his established 610 Office.