Falun Gong practitioner Ms. Li Wenxia was arrested in 2000 and taken to the Tanggu Detention Center. She was incarcerated for nine months and was near death at her release. She was barely breathing and looked skeletal. She could not see clearly, and her hearing was bad. She had difficulty speaking, and her voice sounded like a kitten's. Even though she had been so grossly abused, Communist regime agents still continually harassed and threatened her. Li Wenxia thus lived in great fear and could not recover properly. She finally died in December 2006. 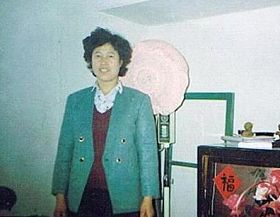 Photo of Li Wenxia prior to the persecution 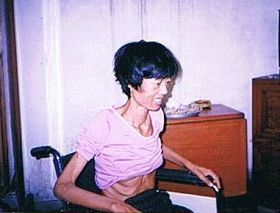 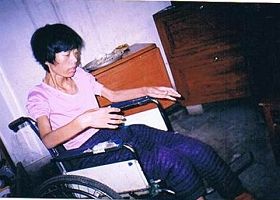 Photo of Ms. Li talking about the persecution she suffered (taken at the end of 2003)

At the end of 2003, we went to Ms. Li's home. She lived at Nanyao Village, Hujiayuan Street, the Tanggu District in Tianjin City. Although the persecution happened in 2000 and it was three years later when we went there, we were still shocked to see the terrible shape she was in.

She was all skin and bones. She sat in a wheelchair and could speak only very slowly. We talked in detail with her about her persecution at the Tanggu Detention Center. Her captors there had often beat her on the head. They kicked her in the stomach. From then on she was unable to eat properly and often vomited whatever she ate.

Ms. Li was made to eat and sleep on a cement floor that was used for inmates to wash, only less than two square meters (about 22 square foot). The floor frequently had more than two inches of water. She could not sleep at all and sat on a pair of shoes to avoid sitting directly in the water. After the guards found this out, they hit her on the head and threw away her shoes. When she was too sleepy, she could only sleep by sitting in the water.

After her release, although she was only able to sit in her wheelchair, people still came to harass her and ask her whether she still practiced Falun Gong.