(Clearwisdom.net) The first time I met Ms. Yang Jiansheng was several years ago at a large concert in New York City. She was performing a Chinese song, and wearing an elegant Chinese dress. Some westerners in the audience said Ms. Yang's voice seemed to awaken something deep within their hearts and made them want to cry. When she came to Hamburg Germany, with the Divine Performing Arts, I had a chance to interview her in the make-up room. 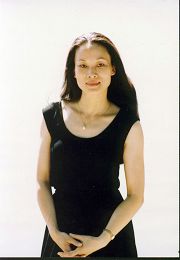 Famous Contralto Ms. Yang Jiansheng lives in Hamburg, Germany. She was previously a singer in the Central Philharmonic Society of China and had famous musicians as her teachers, including Mr. Shen Xiang, his wife Ms. Li Jinwei, Mr. Gino Becki and Mr. Nicola Rossi-Lemeni. Ms. Yang came to Germany by invitation from the Hamburg State Opera, and she has held a number of concerts in Germany.

Reporter: You have been living in Hamburg for many years and held many concerts here. Many audiences have heard your singing. What's the difference in the performance this time?

Ms. Yang: It's different because this time our performance is focused on traditional Chinese culture.

Reporter: Is it easier to sing in the Chinese language?

Ms. Yang: No, it's actually more difficult because my voice training was in western style singing. Chinese pronunciation is more complicated than Italian and the location of the pronunciations are different.

Reporter: How did you make the transition?

Ms. Yang: The method of organizing the articulations of singing that I learned was the western method. It was an entire training system. What I sang was original work. I sang in German if it was written in German, in French if it was written in French, in Italian if it was written in Italian. When I started singing Chinese work in a concert, from the Tang Dynasty 1,300 years ago, to Chinese folk songs and modern songs, I had so much to learn. At that time I realized that singing in Chinese was much harder than singing in western languages. That concert made me want to seek my own roots. So I held a Chinese concert and made up a missed lesson for myself.

From that time, I discovered that Chinese culture is broad and profound, and there are an endless number of pieces to be covered. With folk songs alone, one could put on two concerts. After I started to cultivate, I learned that traditional Chinese culture was a divine culture. So Chinese traditional culture came from a different place. You see, Chinese writing consists of squared blocks while others consist of letters.

Reporter: Do the pieces you sing affect you?

Ms. Yang: They affect me a lot. In the past, what I sang comprised human feelings. There were two eternal themes: love and death, human beings' theme, and what I'm singing now is about eternal life and how to reach eternity, how to go beyond the reincarnation cycles of samsara. It is about returning to one's true self.

Reporter: Do you feel different when you sing these two different themes?

Ms. Yang: Absolutely. In the past I was soaked in the feelings of human attachments. I couldn't get rid of those feelings and I was always very nervous on stage. Now I'm no longer nervous. There is nothing to be nervous about.

Reporter: What song have you prepared for your old and new friends in Hamburg this time? What theme is it?

Ms. Yang: It's called "Awakening." It recalls the bitterness of the reincarnation cycles of samsara, recalling the deep memory of human beings and finding one's true self. Its about how to find one's lost self. I'd like to tell my audience this.

Reporter: How did you become a singer?

Ms. Yang: It seemed to be my destiny. My parents were artists and I grew up in that circle. I saw people performing shows on the stage, and they made shows in real life too. But I did not like it. I swore that I would not enter that circle. I went to the countryside for three years during the Cultural Revolution, where the daughter of one of my mother's friends met me, and she told her, "Your child has an excellent voice."

At that time I thought that people said my voice was very deep, but I never thought about singing. My mother said to me, "It's true. Let me introduce you to a teacher." So I met my very first teacher. The teacher listened to my singing and said, "You sang well. Now let's try out different vocal parts." When I tried different parts the teacher thought none of them sounded bright enough. He said he doubted that I could sing. When I heard that, I wanted to try more. I was already singing, why couldn't I sing? I knew that I could.

This teacher then started to train me. Later I had an opportunity to meet Teacher Shan Xiang who was the best teacher around at that time. He recommended me to The Central Conservatory of Music.

Reporter: Was it a big jump to participate in the Divine Performing Arts?

Ms. Yang: It's a big jump in terms of my capacity. What I'm singing now has very deep meaning and is related to life and the future. One has to have a large capacity to be able to sing it.

Reporter: Singing such a broad topic in Chinese, do you think the western audience can understand?

Ms. Yang: We have translations for the lyrics, and the music itself is boundless. Many westerners in the audience do not know Chinese, but they are still moved to tears. The music is powerful.

Reporter: Among all the shows of the Divine Performing Arts around the world, in which location did you feel the most closely connected?

Ms. Yang: I don't think there is one. I had sung so many times already (laughs). The difference from the past is that now my heart is very peaceful. When I sing I feel I am conversing with the audience, no matter whether the topic is big or small. It's simple and pure, so it's powerful.