President of the Examination Yuan: The Show Displays the Tang Dynasty Culture's Openness and Tolerance (Photo)

The president of the Taiwan Examination Yuan, Mr. Yao Chia-wen, saw the Divine Performing Arts' show at the Taipei International Convention Center on March 18. He accepted an interview to talk about his impressions after the show. 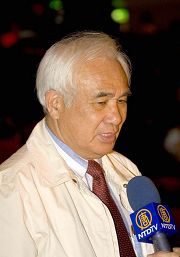 Mr. Yao Chia-wen said that the Divine Performing Arts displayed the beautiful cultures of Chinese history. "Actually these cultures were mostly destroyed (by the Chinese Communist Party). These cultures represent peace, passion, patriotism, and social peace and prosperity. Of course, it also conveys the happiness of liberty, as we say nowadays. Certainly the Chinese people in Mainland China can't enjoy that culture today. When we look at what just happened in Tibet, we are sad. In Taiwan, people can freely practice their beliefs. In Tibet, the persecution of religion is still going on. Not to mention Mainland China. Today, The Divine Performing Arts show made me feel sad (for those Chinese and Tibetans). I wish China could be a free, active, and happy country again."

When asked if the show was suitable for the younger generation, Yao said, "Of course I believe it is suitable because the show is active and happy. The cultural elements it presented are not familiar to young people. (We) should introduce more things of this nature to our young people. It is displaying the most open, progressive, and tolerant Tang Dynasty's culture. That kind of culture is no longer seen in Mainland China."

Yao continued, "While the show doesn't say it directly, actually, in the Tang Dynasty, China was very tolerant, and many religions and nationalities co-existed. That kind of tolerance is not possible under the Communist Party's rule, just look at Tibet. In Taiwan, we embrace Buddhism, Tibetans, the Tibet religion, Falun Gong, and many others. The people of Taiwan are happy about this variety and respect each other. This mentality existed in the Tang Dynasty. But in today's China, it is not something that people experience anymore."