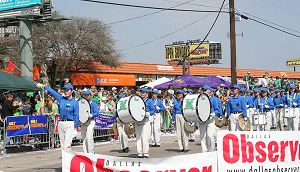 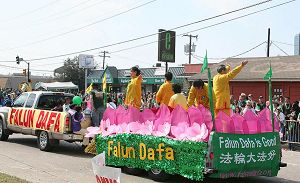 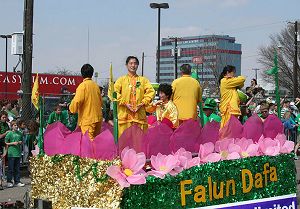 Practitioners demonstrate exercises on the float

It was the 29th Annual St. Patrick's Day parade in Dallas. About ten thousand people came out to see it. The parade started from Park Lane, going alone Greenville Avenue, and ended on Yale Blvd.

Falun Gong practitioners demonstrated the exercises on the float decorated with lotus flowers. Spectators warmly welcomed them. Ms. Zhang, the organizer of Falun Gong's entry, said: "The Chinese Communist Party has made a lot of lies about Falun Gong. Part of our purpose for being in this parade is to clarify the truth and let people see the beauty and compassion of Falun Gong."