On February 4, a couple from Beijing visiting their family in New York attended the Chinese New Year Splendor. They told the reporter, "This is our second time coming to this show. The first time, our daughter took us to Philadelphia. We liked it so much that she took us to New York to see it again. This show deeply moved our hearts." The couple chose not to reveal their names for this interview, fearing retribution from the Chinese Communist Party upon their return to China. The CCP has done much to defame and discredit the Divine Performing Arts and their performances. The shows' contents highlight the persecution practitioners of Falun Gong face in CCP-ruled China today. 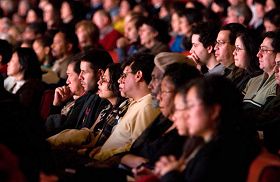 The husband said, "This is a world class show, and it is very touching. It promotes traditional Chinese culture and is a great arts feast for the people of the world." He went into detail on the excellent artistry of the show: "There are two major components in arts. One is content, and the other one is format. This show had the perfect format, including its beautiful background design and colorful costumes, which were very impressive. Also, the dancers are very professional."

He thought the content was very profound. "The show highlighted two values, which are the essence of Chinese culture: truthfulness and compassion. This is why the show was so touching and inspiring."Although the orchestra is not very big, it had both traditional Chinese instruments and Western instruments and combined the Eastern and Western styles. With the beautiful dances on the stage, the orchestra brought the beauty of Chinese art to the audience."

They thought the hosts were great too. The husband said, "They had excellent poise, and they helped the audience better understand the program. Their contribution to the show cannot be ignored."

Not forgetting the "backstage heroes," the husband said, "The directors and the composers of the show were great too. The show would not be so great without these unseen heroes."

Finally, the couple told the reporter that they hope the Divine Performing Arts will one day hold a show in Mainland China.