(Clearwisdom.net) Recently the international media has focused on Falun Gong practitioner Mr. Xiong Wenqi from the Putuo District, who was so seriously beaten in the First Ward in Tilanqiao Prison that he became crippled. Even now. the guards at the First Ward show no remorse and continue to torture practitioners.

When Mr. Xiong was in the First Ward, he was beaten by 8 to 10 inmates every day, and daily was forced to sit on a "tiger stool" (depicted below) for 15 hours. During his imprisonment, he went on a hunger strike and was force-fed a liquid containing chili powder and menthol. Some of this hot liquid got into his eyes. 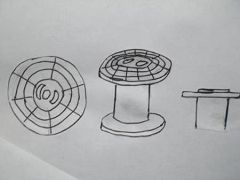 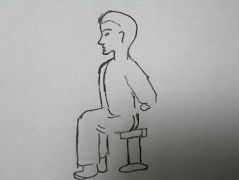 Narrow stool made with copper wires. Practitioners were forced to sit on it for over 15 hours at a time.

This stool actually is produced by the prison for export. It is a mini-transformer wrapped with copper wires with a diameter of 20 cm and an uneven surface. After sitting for several minutes, one's buttocks start to hurt, but guards force practitioners to sit on it every day for over 15 hours. Practitioners' hands are tied behind their backs and they are not allow to move. As soon as the person moves, the plastic shell breaks, and the person has to pay or be beaten or endure even more serious consequences.

Tilanqiao Prison Administration assigns newly accepted practitioners to the First Ward, which holds violent criminals and is set up specifically to administer torture. For instance, the practitioners who do not capitulate in the Falun Gong special management team in the Fifth Ward are taken to the First Ward. Practitioner Mr. Cai Jun from the Pudong Newly Developed District was beaten and "reformed" in the First Ward. The practitioners imprisoned here include Canadian practitioner Mr. Lin Shenli's younger brother, Mr. Lin Mingli. Mr. Guo Jinfu was shocked with five electric batons simultaneously at a labor camp. As a result he has lost of control of his bowels. Mr. Zhu Hua was illegally sentenced to three years of imprisonment and then sentenced to an additional six years. These men continue to be tortured to varying degrees. Mr. Lin Mingli met with his wife in the summer after he was first imprisoned in the First Ward and asked her to bring his winter clothes. After several months, his wife still has no information about him. She only knows that because Mr. Lin Mingli "did not perform well" in the prison, she cannot visit him. 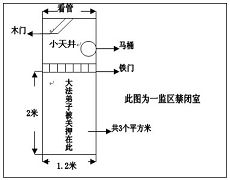 Picture: Practitioners were confined in cells in the First Ward indefinitely

It appears that Tilanqiao Prison in Shanghai is supervised by public prosecutors, but if the public prosecutor saw criminal inmates beating up a practitioner in a ward that was marked "He is Falun Gong," the prosecutor would walk away as if nothing was happening. Instances of practitioners being beaten and injured frequently occurr in Tilanqiao Prison. More seriously, practitioners resorted to staging hunger strikes. When a practitioner was beaten, if he reported it to the authorities, Public Prosecutor Sun Liming would tell the practitioner not to bother him again, saying that the Chinese Communist Party issued explicit documents requiring the suppression of Falun Gong and he could do nothing about it.

Practitioner Mr. Du Ting, 41, was sentenced to eight years of imprisonment in 2001. Because he went on a hunger strike and was critically ill, he was taken to Shanghai General Prison Hospital, located at the Zhoupu District in the Pudong Zone. Early 2007, Mr. Du was imprisoned in the First Ward and was tortured by the guards and inmates so severely that he developed fluid in his lungs and almost died. He later contracted tuberculosis due to his weak state. Despite Mr. Du's condition, prison guard, Zhang Yi incited the inmates to abuse him. As well as the physical abuse, Mr. Du Ting suffered extreme mental abuse.