Ms. Cao Xiuxia Dies as a Result of Persecution in Heilongjiang Province (Photo) 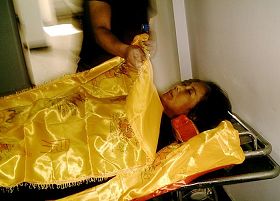 I am Qu Yufeng, the husband of Ms. Cao Xiuxia, who died as a result of persecution when she was 47 years old. Xiuxia and I met each other in 1983, and we had a very happy life together. She was sick with tuberculosis for several years and was hospitalized for four years. Her health did not recover after she checked out of the hospital, but after she started cultivating Falun Dafa in 1998, her tuberculosis was cured. Not only was she energetic, but her temperament became very gentle and patient. She benefited from cultivating Falun Dafa and telling people how wonderful it is. Although I never practiced, I know Falun Gong is truly great, and I supported her practicing sincerely.

On July 22, 1999, it was announced on television that Falun Gong was banned. We could not understand it at all. My wife told me she want to appeal for Falun Gong in Beijing. I knew it would be dangerous because the CCP's terrorist tactics are well-known, but I also understood her point. She went, and she was subsequently arrested, taken back to Jiamusi City, and detained for 15 days. Her employer fired her under pressure. I went to visit her many times, but I was not allowed to see her. I went to the Domestic Security Division at the Xiangyang District Police Department many times to request her release. Finally they told me to pay five thousand yuan. I had to borrow the extortion money so that I could have her bailed out.

After her release, she looked like a completely different person: emaciated and lacking energy. She told me how she was inhumanly tortured for the previous seven months in the detention center. She had been shocked with electric batons, handcuffed to a heater, forced to sit for over 12 hours outside on the cement ground in the freezing winter, and denied water and food. The detainee would have to say she would stop cultivating Falun Gong or she would not be allowed to go inside.

Even though Jiang Zemin's regime tortured her in so many cruel ways, they still did not break my wife's strong will to practice Falun Dafa. She went to Mudanjiang City in June 2000 to reason with the government, but she was arrested and detained for more than six weeks. She went to Yichun City later to tell people the true story of Falun Gong. At around 9 a.m. on May 10, 2002, four officers broke down our door and arrested my wife again. I went to the Qianjin District Police Department to request her release the next day. They said that she undermined public order and had to be sent to a forced labor camp for three years.

Inside the labor camp, she ate food worse than chicken feed, and she was starved. She did slave labor and was not allowed to use the toilet. She was often shocked with electric batons. This time she suffered even more. She became disfigured, and her term was extended by four months. She was severely tortured and had so many ailments: her lungs and heart were both dysfunctional, and she had symptoms such as chest pain, fever, and heart problems. She never stopped practicing Falun Dafa and still told people that it was a righteous way.

At around 3 p.m. on December 6, 2007, my wife and two of her fellow practitioners went to the Heping Group in the suburbs of Jiamusi City to hand out truth-clarifying materials. They were brutally beaten by the group's security guard, Li San. He grabbed my wife by the hair, threw her against an electricity pole , punched her in the chest, and kicked her with all his might. They were taken to the Sifeng Township Police Station and later to the Jiamusi City Suburban Police Department. This incident had a terrible effect on her mentally, and she lived in abject fear from then on. Soon her physical health collapsed, and she died on the morning of August 31, 2008.

Jiang and his regime killed my wife, a good person who trying to be better according to Truthfulness-Compassion-Forbearance. I hope that international organizations and people outside of China will speak out for us. I ask the heavens to punish the murderers and let my wronged wife rest in peace. I truly believe that the day when Falun Gong's good name is cleared is soon to come.