This represents a very small percentage of what is really happening in this brutal persecution. A much larger number of practitioners are missing, and some have had their organs harvested for profit while still alive and their corpses incinerated. These crimes are covered up by tight restrictions on information and the Communist regime's best efforts to hide the facts.

The Beijing Olympics are only one year away. The Communist regime has not implemented its promise of improving human rights. Instead, it has launched another intensive wave of persecution in the name of preparing for the Olympics.

On October 15, 2007, the European Union and China were scheduled to hold a human rights dialog. Prior to the meeting, Vice President of the European Parliament Mr. Edward McMillan-Scott sent a letter to Speaker of the European Parliament Hans-Gert Poettering. In the letter, he mentioned that in the report about torture in China written by the UN Special Rapporteur on Torture Mr. Manfred Nowak, two thirds of those detained by the regime are Falun Gong practitioners. Human rights attorney Gao Zhisheng concluded that about 250,000 practitioners are still being detained.

Over the past few years, police officers from the Jilin City Detention Center and Police Dog Training Base in Jilin Province have used electric shock, beatings, and mustard oil to torture practitioners. In addition, they recently began to put hot pepper powder into plastic bags and then cover the heads of the practitioners with the bags. Ms. Mu Ping was force-fed with mustard oil and her throat was severely injured. Doctors then operated on her without using anesthetics. One of her arms was severely injured during a beating. The officers pushed bamboo sticks into the tips of her fingers and toes, between the skin and the nails. Her face, hands and feet were blistered from the electric shock. In spite of this, the police still violently force-fed her.

Mr. Wu Jiuping, in his 30s, lived in Tianchang City. He was employed by the Testing Department of the Tianchang City People's Hospital. He began practicing Falun Dafa in 1996. He was illegally sentenced to two years of forced labor in 2001 and three years in prison in 2003, with two years of probation.

At approximately 4 p.m. on November 22, 2007, Xia Wenshi, male, head of the hospital security office, along with Domestic Security Division Head Chong Sicao, male, (also head of the Tianchang City 610 Office) of the Tianchang City Police Department, and two police officers went to Mr. Wu Jiuping's home, a new fourth floor apartment prepared for Mr. Wu's upcoming wedding. The details of what happened are under investigation. Mr. Wu's neighbor on the first floor heard a loud noise, thought something had fallen from upstairs, and found Mr. Wu on the ground. The neighbor called out for help and saw the four officials quickly leaving, despite the fact that Mr. Wu was still moving on the ground. It is not certain who called the ambulance, but a rescue worker rushed him to the Tianchang City People's Hospital, where Mr. Wu worked. Soon after, more than a dozen police officers came to seal off Mr. Wu's home. Mr. Wu's bride-to-be, the nurses in the same hospital, and his family are all being closely monitored.

According to an eyewitness, Mr. Wu was still moving after he fell. Sources said Mr. Wu was talking in a state of semi-consciousness after he arrived at the hospital. The left side of his face was severely swollen, and his left eye was almost blinded. His whole back and lower body were covered with bruises. The left side of his pelvis was crushed, and his left leg was broken. On the evening of November 22, 2007, the hospital was barricaded by police. The police told the public that Mr. Wu jumped from the building of his own accord, a tactic repeatedly used by the CCP after causing a practitioner's death. Further investigation determined that after police beat Mr. Wu Jiuping until he was severely injured, they then threw him out of the fourth floor.

Mr. Wu Yueqing died as a result of persecution

Mr. Wu Yueqing, in his 30s, lived in Shuangyashan City, Heilongjiang Province. He was arrested multiple times because he practiced Falun Dafa.

In June 2000, Mr. Wu went to Beijing to appeal for the right to practice Falun Gong, and he was arrested and detained in the Tiebei Detention Center in Changchun City. He went on a hunger strike to protest,and was cruelly force-fed by guards and the prison doctor. They stuck a water bottle down his throat, damaging it, and force-fed food into his trachea, causing his lungs to become infected. He was admitted to a hospital, where guards encouraged prisoners to beat him and pour cold water on him. The police extorted 3,000 yuan from him and detained him for more than nine months.

In December 2001, Mr. Wu was arrested at a Falun Dafa informational material production site and tortured. He was sentenced to 12 years in prison in January 2002 and served in the 23rd Branch of the 11th Ward of the Mudanjiang City Prison. Persons that participated in the abuse of Mr. Wu included 610 Office Chair Ling Qingfan; guards Ling Dawei, Li Hongbo, Du Zhanyi, and Liu Weitong; and others.

Conditions are extremely bad in Mudanjiang Prison. The two years of detention damaged Mr. Wu both mentally and physically. He was sick with tuberculosis and was as thin as a skeleton. Guards ignored his health problems until his life was in danger. He was finally admitted to the hospital, but the medicine made him even worse, and there was a big hole in one of his lungs. He weighed less than 80 pounds and was near death. The Prison Administration still delayed releasing him until he was almost dead. 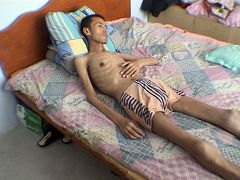 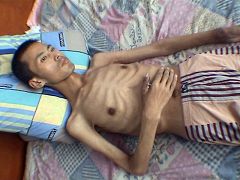 Around the end of 2006 or the beginning of 2007, after returning home, Mr. Wu Yueqing was dying. His wife had passed away earlier. His older sister, Ms. Wu Yuexia, who was also a practitioner and a teacher in Baoshan Middle School, looked after him. On September 28, 2007, police officers Zhao Kui, Fang Xiaoming, and Li Fu from the Baoshan District Department stormed into Ms. Wu Yuexia's home, saying that they needed to check her background information. They took her directly to the Jiamusi City Labor Camp. Ms. Wu Yuexia was Wu Yueqing's only source of support. His condition deteriorated and he died on December 23, 2007, leaving a 13-year-old child to live in an orphanage.

Ms. Zhao Jiafang, 64 years old, lived on Songnan Street at the Songzao Coal Mine in Qijiang County, Chongqing City. She began practicing Falun Dafa in October 1996. After her practice of Falun Gong, her various illnesses disappeared.

On July 20, 1999 Jiang Zemin's regime started the persecution of Falun Gong. At the end of 1999, Ms. Zhao went to Beijing to appeal for Falun Gong and was arrested. Songzao Coal Mine Police Department Party Secretary Yang Mingyu (male) went to Beijing to pick her up and detained her for 30 days in the Qijiang County Detention Center.

After returning home, officers Yang Mingyu and Yu Zhengming ordered Ms. Zhao's family to pay 3,000 yuan to cover Yang Mingyu's trip to Beijing, otherwise they would deduct the amount from her husband's salary.

In August 2001, led by officer He Xinqiang, several local police officers and security guards arrested Ms. Zhao at her home. They detained her in the county detention center and violently interrogated her. They had her sentenced to eight and half years in prison on charges of "obstructing the law" and took her to the Yongchuan District Forced Labor Camp.

Ms. Zhao was subjected to years of brutal treatment in the Yongchuan District Forced Labor Camp. Due to long-term hard labor, her eyesight was blurry. She passed out three times in the camp, but, the guards at the camp ignored it.

She was finally taken to the labor camp clinic, but after she was injected with some unknown drugs, she appeared to have difficulty breathing. To avoid being held responsible for her death, the labor camp authorities released her for medical treatment on October 1, 2007, and she was picked up by her family.

Her family immediately took her to the Coal Mine Employee Hospital, but she did not recover. She died at 3:40 a.m. on December 21, 2007.