On the morning of September 23, 2007, practitioners who attended the Mid-USA Falun Dafa Cultivation Experience Sharing Conference gathered for a parade in Minneapolis. A series of traditional Chinese performances, including celestial maiden dances, waist drummers and a Falun Gong exercise demonstration attracted many citizens. The police who led the parade said that they liked the parade and hoped that practitioners would hold similar activities next year. 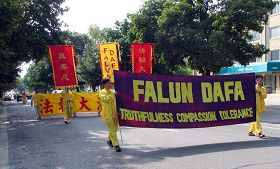 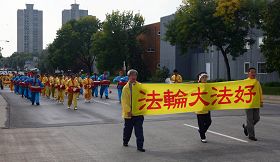 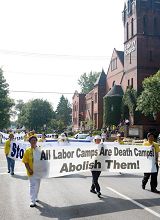 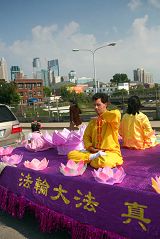 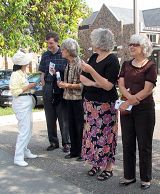 The parade consisted of seven parts, including Falun Dafa banners, float, fairy lady dances, exercise demonstration, waist drummers and Tang-style drummers, reenactment of organ harvesting and promoting the Nine Commentaries on the Communist Party. The parade went 1.5 miles. Many citizens were attracted to it and accepted Falun Gong materials.

Francisco of Minneapolis told the reporter that he likes the Falun Gong music. He said he'd never heard of Falun Gong, but he is very interested in learning the exercises.

Oliver of Minneapolis read about Falun Gong in the newspaper five years ago. He was aware of the persecution in China. He expressed that Falun Gong's belief in "Truthfulness-Compassion-Forbearance" is good for society. He said that he wanted to know more about Falun Gong, but he never had a chance to talk to practitioners until today. He talked to three practitioners during the parade, and they told him many details of Falun Gong. He believes that Falun Gong will spread all over the world very fast, because it is good, peaceful and free of charge. Oliver is also interested in learning the practice.

According to Akiko, a Falun Gong practitioner who was in charge of contacting government officials and police, the Mid-USA Falun Gong conference and related activities were supported by the Minnesota and twin-cities governments. The governor of Minnesota, the mayors of Minneapolis and St. Paul, and various congressmen and senators from Minnesota sent congratulation letters to the conference.

The police also offered to help with the parade. Although the police are busy due to the bridge collapse which occurred several weeks ago, the police department still assigned six police cars to lead the parade. Policeman Lopez expressed that the parade was very peaceful and he and his coworkers liked it. He read one of the practitioner's flyers. He said that the persecution of Falun Gong is wrong.

Another policeman said that he hoped there would be a similar parade next year and that more people would come to see it.