(Clearwisdom.net) At the beginning of July, the Serbian weekly magazine Revija 92 published a two page detailed report about the persecution of Falun Gong in China. The title of the report read, "Shocking: The trade in organs from political prisoners". The article exposed the organ harvesting from Falun Gong practitioners in China.

The caption read, "The Chinese regime, which in 1999 banned the mass movement for physical and mental improvement Falun Gong, set up concentration camps where Falun Gong practitioners are imprisoned and where their organs are harvested." 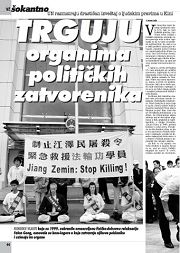 magazine is known to report on sensitive topics. The beginning of this report talks about the different United Nations Organisation (UNO) commissions, which have been pre-occupied with organ and human trade for months and are looking closely at various types of information from China.

"It turns out that in China the problems are most pronounced. If one includes rising corruption, those in power in that country with the largest number of people in this world commit unbelievable crimes. An agent from China's public security who was able to escape from China discovered that China still runs concentration camps," according to the UNO commission report.

The article recounts that Falun Gong spread quickly in China and was so popular that within a short time over 100 million people were practicing it.

In addition, the investigative report by David Kilgour, former Member of Parliament and a former Canadian Secretary of State for the Asia Pacific region, and David Matas immigration and international human rights lawyer in private practice in Winnipeg is cited. The report quotes that the popularity of the movement was a thorn in the side of the authorities and that Jiang Zemin, the former Chinese head of state, initiated a brutal persecution in 1999 with the intention of wiping out Falun Gong.

It was noted by the magazine that hundreds of thousands Falun Gong practitioners were arrested, more than 100,000 were taken to forced labour camps and more than 1,000 completely healthy individuals were detained for "re-education" in psychiatric clinics. Systematic torture and sexual abuse are daily occurrences in these places. At least 2,846 people have been murdered as result of torture at the hands of the Chinese police and according to other information this is just the tip of the iceberg."

The report also described how the world was shocked when it learned in spring last year about the concentration camps. They heard that organs were harvested from living Falun Gong practitioners and said that the organs have become a hot commercial item. On January 31st of this year, an independent report supported these allegations, "Based on what they found, organs are harvested from living individuals, who were murdered after the operation."

Neither the Red Cross nor other human rights associations are allowed to visit prisoners in China. This is the way the Chinese Communist regime blocks the only route to verify information and find potential evidence.