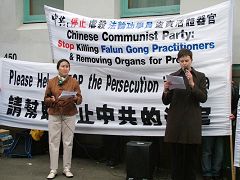 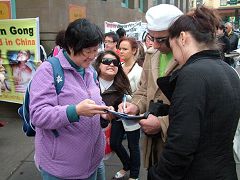 Chairman of the Falun Dafa Association in Australia John Deller said that Falun Gong practitioners have been subjected to the CCP's persecution for eight years, and during this time, the practitioners have been exposing the truth about the persecution in a peaceful manner. Falun Gong is a legally registered group in Hong Kong, yet the Hong Kong Immigration Department used forcible methods to deport practitioners who came to Hong Kong to take part in the July 1 activities and to support the lawsuit against Jiang Zemin. This shows that the CCP has become desperate and has once again let the world clearly see its rogue nature and need for control.

Deller pointed out that the Hong Kong government has once again bowed to the CCP, assisted it in trampling human rights, and has brought disgrace to all Hong Kong people.

Deller also said that the forcible deportation of Falun Gong practitioners included three Australian citizens. He called on the Australian government to stand up to stop the CCP from blatantly trampling human rights in Hong Kong.

Shan Yula, Chairman of China Free said that since July 1, 86 years ago, when the CCP formed, it has brought endless catastrophe to the Chinese nation and people. On this day, the evil specter of the CCP started intruding into the body of the Chinese nation, formed a malicious tumor and spread throughout China, leading to the unnatural deaths of 80 million innocent Chinese people, and causing the large-scale brutal and inhuman persecution of the Falun Gong spiritual cultivation group. Ten years ago, when Hong Kong's sovereignty was handed over to Chinese rule, the CCP promised that Hong Kong's social system would remain unchanged for 50 years. However, in just 10 years, the recent deportation incident that took place at the Hong Kong airport indicates that the CCP has reneged on its promise on the issue of "One Country, Two Systems."

The CCP Is Like a Worn-out Boat, Steadily Sinking

A representative of the Service Center for Quitting the CCP pointed out that the Hong Kong Immigration Department's deportation incident indicates that the CCP is in a desperate state, unconcerned with the complete sacrifice of the image of Hong Kong Customs and the Hong Kong government to the outside world. The representative said that one who loses people's trust loses the country. The CCP has come to a dead end, and like a worn-out boat floating in the storm, it is steadily sinking.

She also said that more and more people inside China and abroad have clearly seen that the number of people who have quit the CCP and its affiliated organizations has reached 23 million. Quitting the CCP is to separate oneself from the evil party and to choose one's own future. Quitting the CCP is an indication of the people's real awakening.

Hong Kong resident Wang Lian, PhD, said that four years ago, at the behest of the CCP, Hong Kong Customs violently denied entry to more than 80 Falun Gong practitioners with the trumped up excuse of "security reasons." The case has been questioned widely by people of all social strata. Today, the Hong Kong government did not indicate any regret for what it had done, under the manipulation by the CCP.

He believed that since the CCP started the persecution of Falun Gong, a group that follows the principle of "Truthfulness-Compassion-Forbearance," it has incurred heaven's anger and the people's condemnation. The Nine Commentaries on the Communist Party inspired a major trend of quitting the CCP, and there are now 23 million people who have quit the CCP and its affiliated organizations. This is a historic period. The CCP is afraid that people inside China will learn about the truth contained in the Nine Commentaries and the movement of quitting the CCP. Since mid-June, in big cities such as Beijing, Tianjin, Shanghai, and in Guangdong Province, the CCP has systematically deferred the issuance of visas to Hong Kong until July 2. Hundreds of thousands of travelers in the mainland were unable to visit Hong Kong as scheduled. Thus they would have no opportunity to witness the grand tide of quitting the CCP when the CCP celebrated "July 1" in Hong Kong.

Wang Lian pointed out that the CCP rampantly tramples human rights in Hong Kong, has destroyed Hong Kong's image to the outside world, and created the largest and most malicious deportation incident in Hong Kong's history. This madness shows that the CCP has reached the point of collapse.

During the rally, many passersby stopped to watch and listen. Many people who have learned the facts signed their names to support the CIPFG going to the mainland to investigate the CCP's atrocity of harvesting organs from living Falun Gong practitioners.