(Clearwisdom.net) On July 21, 2007, a solemn press conference was held across from the Chinese Embassy followed by a parade through central London to mark eight years of brutal persecution of Falun Gong practitioners by the Chinese Communist Party (CCP). 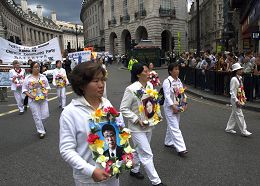 Commemorating fellow practitioners who were tortured to death by CCP 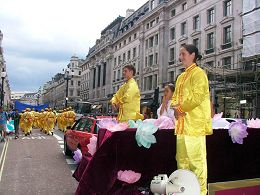 Peter Jauhal, the chairman of the Falun Dafa Association in the UK said in his speech, "These past eight years have seen a relentless, savage and incomprehensible campaign to eradicate Falun Gong practitioners. But for eight years Falun Gong practitioners have stood firm in their beliefs, compassionate in their response and committed to exposing the facts of this senseless persecution.

"People are disgusted and revolted by what they have seen lurking behind the CCP's mask and have turned away by the millions. The peaceful dismantling of the CCP is becoming a reality. At the beginning of the persecution, many people were deceived by the CCP's lies. Eight years have passed and more and more people have learned the truth about Falun Gong and recognize the evil nature of the CCP.

In a speech by Annie Yang, she recalled the torture she endured recently in a Chinese forced labor camp for practicing Falun Gong: "On March 1, 2005, 7 to 8 policemen searched my home without any legal procedure. My computer, printer and Falun Gong books were confiscated. They sentenced me to forced labor camp without any legal proceedings. In the camp, they tortured me physically - depriving me of sleep, food and water. In very hot summer weather, 40oC (104oF), I was forbidden to shower or wash my clothes, and even using the toilet was very restricted. I was forced to sit on a board without moving a muscle for 20 hours at a time. Festering wounds developed on my buttocks. I was also mentally tortured and forced to watch brainwashing propaganda that slandered Falun Gong over and over. After 18 months my hair turned white. When I was released my whole body was swollen. It is still very difficult for me to walk."

Ms. Fengling Zhou also spoke about her experience under the oppressive regime: "China, under the Communist Party, is like a huge prison. Because I refused to give up my belief when I was in China, I was watched every day. I was not allowed to speak with other practitioners. I was in constant danger of being sent to brainwashing center or forced labor camp. I was forced to leave my family and lead a homeless life for two years. When I came home for a few days on Chinese New Year, I was arrested at my home and illegally detained for one month.

"Once people know the truth in life, they will not give up their belief in the face of physical or spiritual torture. Falun Gong's peaceful principles of Truthfulness, Compassion, Tolerance means that in the CCP's campaign against Falun Gong, practitioners will not respond with violence. We speak up and tell the truth to all people because we believe in the power of truth and believe justice will prevail.

"When you are enjoying the happiness of family, please do not forget those who lost their families and became homeless because of the Communist Party's persecution. When you are enjoying the air of freedom, please do not forget those who, in China, are standing up for their belief and for their right to freedom of belief. Freedom is precious and people who have freedom should help those who are fighting for it. I hope you can learn the truth about Falun Gong and the persecution and help bring the persecution to an end."

Other words of support at the press conference included those by Councillor Brian Coleman, Zek Halu, and John Dee of the European Friends of Falun Gong who said, "We know for certain that thousands more are being kept against their will and tortured in prisons and labor camps across China, and the lives of friends and relatives of practitioners are also made intolerably difficult.

"At a time when the world's eyes are fixed firmly on China, we urge it to end its persecution of Falun Gong immediately, to end its 'bloody harvest' of human organs and to release prisoners of conscience being held against their will."

Following the press conference was a parade through central London. The parade included banners, music, waist-drummers dressed in golden uniforms, and many female practitioners dressed in white holding adorned photos of Falun Gong practitioners who were killed in the persecution. The tail of the parade included a float, placards and banners exposing the atrocities committed by the CCP and highlighting the organ harvesting of Falun Gong prisoners of conscience. There was also enthusiastic loudspeaker calls rallying support from the thousands of onlookers. The parade traveled from the Chinese Embassy along the busy Regent Street to Trafalgar Square.

Thousands of leaflets were also handed out. One elderly woman came back further down the road and asked for another leaflet. She was mopping up her tears with a tissue and said that she was very moved by the parade. She said, "Why don't our governments do something about it?" but she quickly added "because all they care about is money." And she continued to shed tears and say how awful it was for the people in China.

In Trafalgar Square practitioners dressed in golden uniforms demonstrated the gentle Falun Gong exercises to a huge audience. Banners, leaflets, speeches and posters exposing the persecution were also part of the three-hour event in the square.

During the demonstration of the second exercise, one young man from Kuwait who looked transfixed by the practitioners, smiled and said "It's amazing!"

A Croatian man currently living in the U.S. said, "I support Falun Gong primarily because it is peaceful, unlike the Chinese Communist regime. I hope this will bring a peaceful transition in China from Communism to a free market economy, because a better life for the people in China would mean a better life for all of us."