Exposing the Persecution of Ms. Zhou Zi at the Beijing Women's Prison (Photo)

Falun Gong practitioner Ms. Zhou Zi was born on July 22, 1977 and lived in Beijing's Fangshan District. She is an English teacher at the Beijing Instrumentation Technical School. Ms. Zhou was sentenced to seven years and six months in prison in March 2003 for practicing Falun Gong and clarifying the truth. The Haidian District Court sent her to the Beijing Women's Prison in July 2003, where she suffered inhuman torture for persisting in her belief. In February 2007, the prison authorities put her into the "training unit" to suffer intensified abuse. She began a protest hunger strike. The prison officials have tried to keep information on her from leaking out, and her current situation is unknown. 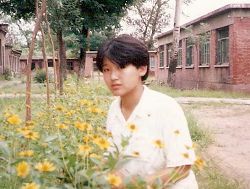 Steadfast Falun Gong practitioners are subjected to "training" by the prison authorities. Practitioner Ms. Yuan Li suffered from torture-induced ear problems. She tried several times to appeal her sentence but failed. She stood up during a meeting to expose the actions of the police. As a result, Ms. Yuan was put in the "training unit" to suffer further persecution. The reason given for her intensified punishment was "interrupting order at the conference."

Toward the end of January 2007, Ms. Zhou Zi defied those who tried to brainwash her and refused to wear a prisoner's ID badge. No.10 Ward head Zheng Yumei (female) assaulted Ms. Zhou personally, kicking and stomping on her. Zheng put Ms. Zhou into the "training unit" with the false excuse that she had verbally attacked the prison warden.

Ms. Zhou refused to wear a prisoner's ID badge because she knows that she is not guilty. Following the principles of Truthfulness, Compassion and Tolerance benefits society and is legal anywhere else in the world. However, officials at the CCP-run prison deprive practitioners of the right to appeal and deny them their basic human rights.

Because Ms. Zhou resisted the attempts by the guards to force her to give up Falun Gong, officer Zheng Yumei put her into the "training unit." Furthermore, with instigation from prison wardens Li Ruihua and Zhou Ying, officials in the prison affairs section, the education section, and the supervision section cooperated with Zheng Yumei to further persecute Ms. Zhou.

Tang from the prison affairs section said, "Zhou Zi's hunger strike is her own decision. No one will be responsible if something happens to her." Ms. Zhou began her hunger strike at the end of February 2007 to protest Zheng's actions and the prison's refusal to stop them.

Instead of investigating Zheng's actions, however, the prison authorities used "personal cangues," or inmates assigned to closely monitor Falun Gong practitioners, to give false reports that Ms. Zhou's hunger strike was a standalone action and had nothing to do with the prison officers' actions. If Ms. Zhou's hunger strike had nothing to do with the prison, then why have they cut off all means of contacting her?

In early March 2007, Ms. Zhou's family called the No.10 Prison Ward several times to inquire about her. Officer Zheng Yumei instructed the officer who answered the calls not to tell the family that Ms. Zhou had been sent to the "training unit." The prison officials kept lying and hiding information from the family. Since March 2007, Ms. Zhou's family members have traveled a long distance to the prison by bus on visitation days every month and asked over ten times to see Ms. Zhou. The prison authorities have refused to allow them to see her and refused to meet with the family themselves. Xing Hongjun from the prison's affairs section gave the excuse, "No family visits are permitted during the 'training' period."

In Ms. Zhou Zi's case, they turned down the family visits because she could expose their evildoings. During one visit in November 2005, when Ms. Zhou told her family what she had suffered in the prison, the conversation was recorded. The revelations Ms. Zhou had made became the reason for her to be cut off from further contact with the outside world.

Since the inception of the persecution of Falun Gong, the CCP-run prisons have been a mechanism used to persecute innocent people and cover up the CCP's crimes. Incarceration in the "training unit" and the denial of family visits are not isolated incidents.

Beijing Women's Prison wardens Li Ruihua and Zhou Ying are following orders from their superiors and pressuring prison guards to force Falun Gong practitioners to give up their belief. They cover up illegal activities inside the prison to the outside world, and internally, they use a combination of coercion and incentives to get the guards to carry out the persecution. For personal gain, the guards utilize the "personal cangue" system to constantly monitor and persecute the Falun Gong practitioners, and to provide false testimony whenever they need it. From top to bottom, the prison is a machine designed to carry out the persecution.

The prison's internal affairs officials refuse to stop the guards from inappropriate behavior, but instead serve as a cover-up mechanism for them. Officials at the Prison Affairs Section and the Education Section are directly involved in persecuting the practitioners and sending them to the "training unit." People in the education section download Minghui website articles about atrocities at this prison and attempt to analyze how the news leaked out to think of ways to prevent further leaks.

More than 100 days have passed since Ms. Zhou Zi started her hunger strike in February 2007. Ms. Zhou's current situation is still unknown. Her family has visited the prison over ten times and hasn't been allowed to see her. Her aged parents have repeatedly made the eight-hour journey, but still know nothing about their daughter's condition. The prison has not just persecuted Ms. Zhou Zi, but also made her family members suffer.

Responsible personnel at the prison

In 2004, Li Ruihua and deputy prison warden Zhou Ying pressured guards to brainwash Zhou Zi and other steadfast practitioners. This led guards Zheng Yumei, Xiao Rui and others to torture Zhou Zi relentlessly. Li also covered up Zheng Yumei's crimes. While internally organizing the persecution of Falun Gong practitioners, Li accepted interviews and awards, and played up the prison's "humanitarian management." Li Ruihua promotes her policy of having a day for visitors to talk to her, but has persistently refused to talk to Zhou Zi's parents.

Zhou Ying has been in charge of the persecution of Falun Gong at the prison since 2000. She has collaborated with police officers Tan Fengqing and Zheng Yuhua, as well as others, to persecute practitioners and cover up the persecution.

Zheng Yumei, former Head of the No.10 Prison Ward

Between July 2004 and 2007, Zheng Yumei and police officer Yao Rui urged "personal cangues" to persecute practitioner Ms. Zhou Zi. They took turns to physically and verbally attack Zhou Zi, subjected her to sleep deprivation, and connected her punishments with other inmates to turn them against her. In January 2007, when Zhou Zi refused to wear a prisoner's ID badge, Zheng kicked and stomped on Zhou Zi. Later she sent Zhou Zi to the "training unit." Zheng Yumei has been transferred and is currently the head of the No.13 Prison Ward. She has brutally tortured practitioners Li Li, Ye Changzhi and others. She has received several awards for her persecution of Falun Gong practitioners.

Xiao Rui, Head of the No. 10 Prison Ward

Guo Lanxiang, former Head of the No.2 Prison Ward

In 2007, Tang had "personal cangues" make false statements on the guards' behavior as related to Falun Gong practitioners. He has been instrumental in covering up the persecution.

In 2007, Gao colluded with other prison officials to cover up the persecution of Zhou Zi. While Gao was in charge of a prison ward, he brutally tortured many practitioners. He was in charge of covering up the death of Ms. Dong Cuifang, who died as a result of torture.

Yang is in charge of the "training unit," which was specifically created to attack and "transform" steadfast practitioners who resist the persecution, including Zhou Zi.

"Personal cangues" and collaborators involved in the persecution of Zhou Zi: