(Clearwisdom.net) On July 3, 2007, some volunteers from the Finland Service Center for Quitting the CCP (Chinese Communist Party) and Falun Gong practitioners went to Turku to expose the CCP's crimes and support the 23 million Chinese people who have quit the CCP. 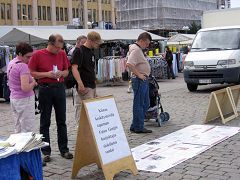 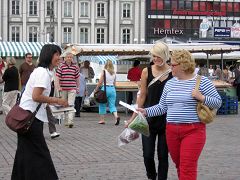 Passing out fliers about people quitting the CCP 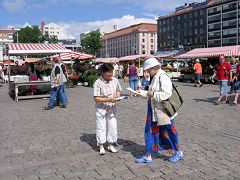 Passing out fliers exposing the persecution 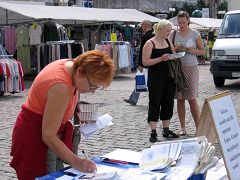 People sign the petition to help end the persecution

It was a sunny day, and the downtown market was bustling. Practitioners prepared display boards and fliers to tell people about the CCP's crimes in persecuting Falun Gong practitioners over the last eight years.

After looking at the display boards, some Fins said that they have known about the persecution and cannot comprehend the CCP's reprehensible actions. The practitioners recommended that they read the Nine Commentaries on the Communist Party to find out more about the CCP. Many locals thanked and encouraged the practitioners, and some signed their names to support the efforts to help people to quit the CCP. After the volunteers answered the people's questions, some of them encouraged practitioners to continue their efforts.

A man from the Middle East compared the CCP's fate to that of the Saddam Hussein regime in Iraq. One lady almost cried when she heard the experience of practitioner Ms. Jiang, who was shocked with electric batons after she publicly declared her withdrawal from the CCP. Others voiced their opinion that the human rights situation in China must improve before the Olympics should be held there.