On June 3rd, 2007, a three-day Falun Gong Cultivation Experience Sharing Conference was held in Kiev, the capital of Ukraine. A dozen or so practitioners from various regions shared their experiences in cultivation and raising awareness of the persecution during the past year. 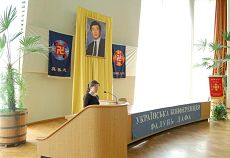 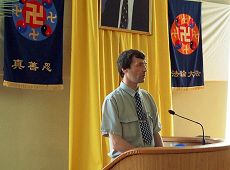 The first speaker was Veronica from Kiev who talked about how she overcame sleepiness to get up and do the Falun Gong exercises every morning. Afterwards she would participate in group Fa-study with fellow practitioners on the Internet every day without fail.

Yulia from Kharkiv shared about how she came to enlighten to the importance of not letting go of any opportunity to save sentient beings. 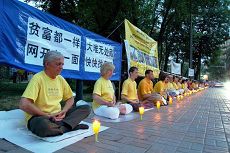 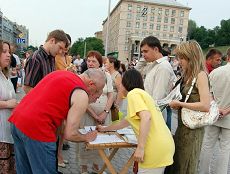 When informed that millions of people in China are now quitting the CCP, an elderly gentleman told the practitioner, "You see, the Chinese people have already recognized the evil nature of the CCP and are starting to fight it. We have seen through its evilness long ago, which was the reason why the Soviet Union was dissolved. In any case, the Chinese Communist regime is also on the verge of disintegration."

On the last day of the event, practitioners held a grand parade. Even though it drizzled, the weather did not dampen practitioners' enthusiasm. Louder and louder, the waist drum beats spread the beauty of Falun Gong. 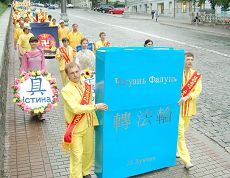