On May 12, practitioners held a Falun Gong truth-clarifying photo display in downtown Canberra to expose the CCP's brutal persecution. After seeing the photos and learning about the CCP's atrocities of harvesting organs from living Falun Gong practitioners, many tourists commented that the CCP is evil and practitioners' courage is admirable. 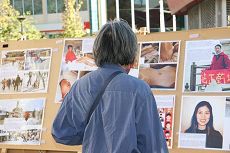 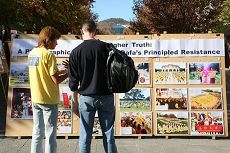 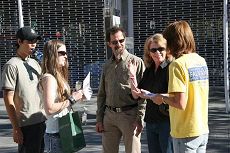 A practitioner clarifies the truth to tourists 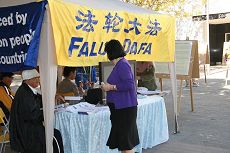 The practitioners told the passing-by tourists: Falun Gong was first introduced to the public in 1999 and has spread all over the world. However, the CCP started to persecute the practice in 1999 as practitioners outnumbered party members. Facing the persecution, practitioners around the world have been tirelessly clarifying the truth to people from all circles and calling for actions to stop the persecution.

Many tourists acquired the practitioners' truth-clarifying materials and viewed the photo display. Some expressed their support to Falun Gong and condemned the CCP's atrocities. A number of people also commented that people around the world should boycott the Olympic Games in Beijing.