(Clearwisdom.net) Early this year, UN refugees Ms. Ma Hui and her daughter were unlawfully abducted and deported by the Russian Government. On May 13, another UN refugee was abducted and deported from Russia. Falun Gong practitioner Gao Chunman is a professor from Tsinghua University, forced to flee China because of the persecution. Growing evidence has shown that Falun Gong practitioners in China have been subjected to brutal torture methods including inhumane organ harvesting. In response to the unlawful deportation, practitioners in the US, Canada, Germany, Finland, Japan and Hong Kong have held activities to protest and condemn the Russian Government for its infringement of international law. Practitioners in Germany have also written to EU members, calling for action. 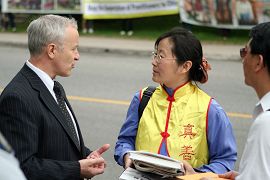 The Falun Dafa Information Center has reported the case of 73-year-old Mr. Gao Chunman, a Falun Gong practitioner and a professor from Tsinghua University. Mr. Gao is a United Nations refugee. Mr. Gao's wife, a Russian citizen, said that at 11:30 a.m. on May 13, several plainclothes officials from the Federal Immigration Bureau of Russia deceived them, claiming that they wanted to rent Mr. Gao's house, and entered the home. Without showing any legal documents, they cut the phone line and abducted Mr. Gao. Mr. Gao's wife pointed out that the whole procedure was similar to what happened to Ma Hui, a practitioner recently abducted and deported back to China by the Russian government.

As the abduction took place on a Sunday, all related agencies including the office of United Nations High Commissioner for Refugees (UNHCR) and human rights organizations were closed. It is evident that the Russian Government purposefully chose the abduction date so that no rescue efforts could be taken in time.

Deportation Order Given by the Highest Level

According to a deputy director of the UNHCR, the director of the Russian Immigration Bureau said that the deportation order was given by the highest level and he was just to execute the order.

On the afternoon of May 13, a group of practitioners were arrested when they gathered to celebrate World Falun Dafa Day. Police officers told them that Moscow had ordered a ban on all public Falun Gong activities.

The Minghui/Clearwisdom website reported that on the day of the deportation, May 14, Mr. Gao Chunman didn't see any Chinese government officials at the airport when he arrived in Beijing. Mr. Gao went to his son's house in Beijing.

Since more and more persecution cases have been exposed, the CCP tries to perpetuate the persecution in a covert way. According to Falun Gong practitioners in China, in recent years, Chinese police often abduct and jail practitioners secretly.

The deportation incident happened just two days before the EU-China Rights Dialogue, which was to be held in Germany, the capital of the EU Chair country. On May 14, practitioners in Germany wrote to EU members. In addition, they rallied with other European rights groups condemning the persecution of Falun Gong and calling for an open-door human rights dialogue. A representative of Falun Gong practitioners pointed out that the Chinese Communist Party (CCP) is just playing a game to deceive the public by holding so-called human rights dialogues with western countries. Its sole interest is to deceive the international community and to solicit western countries with commercial interests to become its accomplices in the persecution. Falun Gong practitioners urge western countries: Openly condemn the CCP, uphold justice and help stop the persecution!

Practitioners in the U.S. and Canada went to their local Russian consulates to protest, urging the Russian government to conform to international law and not follow the CCP in the persecution of Falun Gong because of commercial interests.

Spokesperson for the Canada Falun Dafa Association, Zhou Limin told the reporter, "Russian authorities deported a Falun Gong practitioner and UN refugee on World Falun Dafa Day, May 13. This is the second time that the Russian authorities have deported Falun Gong practitioners. We are here to appeal to the Russian government not to follow the CCP to participate in the persecution. More importantly, we hope Russia considers its international reputation and makes a right choice for the future of its nation."

On May 18, Hong Kong practitioners and supporters rallied outside the Russian Consulate to protest the deportation. At the consulate, they read aloud an open letter, which pointed out that the unlawful deportation of the practitioner, an officially recognized UN refugee, by the Russian government violated the UN Refugee Convention. The practitioners urged them not to assist the CCP in the persecution out of commercial interests. Southern Democratic Alliance Chairman James Lung and Sun Bin, a member of the Sun Yat-sen Association, also joined the rally. They called on the Russian authorities to treat Falun Gong practitioners properly.

On May 17, practitioners in Japan protested outside the Russian Embassy in Tokyo. They called on the Russian government not to be deceived by the CCP, which is doomed for destruction, and to choose to join the rest of the world to uphold justice and end the persecution.

Vice-President of the European Parliament: All Countries Should Support Falun Gong Practitioners

The Vice-President of the European Parliament, Mr. Edward McMillan-Scott gave a public speech at a conference held before the EU-China Rights Dialogue. He said that he went to China last year and personally met a witness and victim of the persecution who testified to the CCP's atrocities of organ harvesting. McMillan-Scott stressed that the Canadian report on organ harvesting is absolutely reliable and emphasized that the 2008 Olympic Games should not be held by the CCP regime which repeatedly violates human rights. He also said that, at the very least, they must allow the UN Human Rights Rapporteur to enter detention centers, labor camps, prisons and police units to perform independent investigations. He also suggested that the EU-China Rights Dialogue should be suspended.

Mr. McMillan-Scott also urged all countries to stand up to support Falun Gong. He said that China is being controlled by a totalitarian, crude and brutal regime. Similar to the destruction of the communist party in Eastern Europe, the persecution of religious groups may soon lead to the collapse of the CCP. Standing in front of the Berlin Wall, which was a symbol of the division of Europe, Mr. McMillan-Scott said that people should pray that the tens of thousands or even millions of Chinese detained in labor camps would be soon released and the CCP regime would soon collapse. He also said that all countries around the world should support Falun Gong practitioners who are being harshly persecuted by the CCP.