May 13, 2007 marked the eighth annual World Falun Dafa Day. Falun Gong practitioners from New York held an activity at Union Square in Manhattan to celebrate along with the local people. 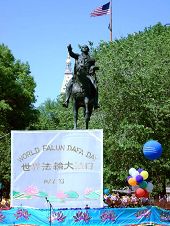 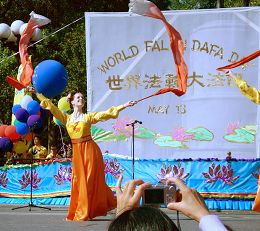 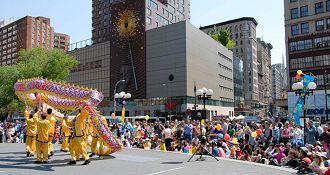 Many people are attracted to performances by practitioners

A representative from the state senator's office reads proclamation 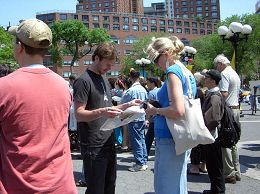 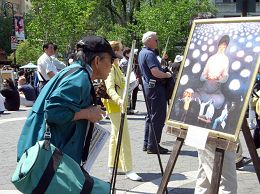 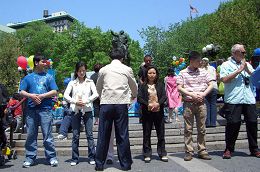 Two hosts of the celebration introduced the history and background of Falun Gong and Falun Dafa Day in Chinese and English, and invited everyone to enjoy performances by practitioners.

The Divine Land Marching Band began by performing the song "Falun Dafa is Good." This was followed by practitioners performing the dragon dance. After the dance was the waist drum performance, fan dance, and umbrella dance.

Clarifying the Facts of Falun Gong to New Yorkers

Practitioners of different ages and from different countries demonstrated the exercises while the hosts described the movements.

Several Western practitioners shared their cultivation experiences and how they have benefited from practicing Falun Gong.

Practitioners displayed many art works, which attracted a large number of people. Deluce, a local citizen, said that he had heard about Falun Gong and the persecution, but only from the artworks had he learned how brutal the persecution was.

Learning the Facts and Quitting the Party

A group of twenty Chinese people came to Union Square. They wanted to learn more about Falun Gong. Practitioners taught them the exercises and told them the about quitting the party. They all later quit the CCP.