Divine Performing Arts' performances deeply touched the Korean people, who have a similar culture with the Chinese, and awakened the spirit of "loyalty" in their hearts. Many Korean people wept during the show.

Mr. Xue Yongzhu is the chair of the North and South Korean Youth Communication Association. He enjoyed the show and said that the show restores the 5,000-year-old Chinese culture, nearly ruined by the Chinese Communist Party (CCP).

Mr. Xue said that he had been waiting for the show for a long time. He said that the 5,000-year-old Chinese culture is the core of Eastern culture. However, the Chinese Communist Party (CCP) ruined it and it is not as pure as before. He pointed out that the show restores the ruined culture.

He said, "The show manifests the Chinese people's spirit of pursuing truth and justice. I am very fortunate to have watched it -- it is very meaningful to me."

Mr. Xue expressed his wish that all young people from both North and South Korea could enjoy the show. His understanding of the show's name--Divine Performing Arts, is that "humans and Gods are together." He said that the wisdom of the saints in history are manifested in the show.

Regarding the interference from the CCP, where the CCP tried to block the show in Korea, Mr. Xue said, "Everybody knows the reason. No matter how the CCP tries to lie about history, history cannot be distorted or covered up. It is very important that many people learn the truth of history through the Divine Performing Arts' performances."

"Divine Art" Is the Will of Heaven

Prof. Nan Zaihe is from the Korea Physical Education University. As a Christian, he had special feelings of the show. 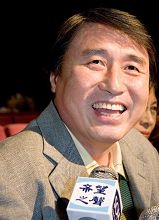 Prof. Nan said that a picture of Falun Gong practitioners peacefully appealing on Tiananmen Square jumped into his mind when he was watching the show.

Prof. Nan said that the Chinese characters of "Divine Art" manifest Heaven's will.

Mr. Jin Xundong, the chair of the Association of Artists in Shuiyuan City, said: "I was amazed by this show. I have never seen such a great show before, which conveys 5,000 years of history through art." 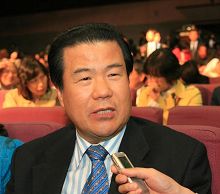 He said that the dance, "A Dunhuang Dream" made a very deep impression on him. He enjoyed the dance and said that the idea that the artist obtained hints from gods in his dream was also amazing.

Mr. Jin condemned the CCP's interference. He said that it was shameless to use political power to interfere with the performing arts.

The Show Tells of Human Rights Violations in China

Ms. Liu Jixian, the former chief editor of Maeil Business, expressed her feelings after the show. She said: "The show was very welcomed in Europe and America. The Western audience is not familiar with the pure Chinese culture, but they sensed a new culture, which values loyalty and the principle that 'good will be rewarded with good, and evil will be met with retribution,' and they are greatly moved." 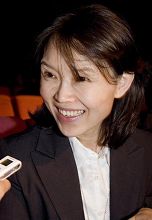 "It is dangerous if the artists only want to bring beauty to the audience, because that will make the art become pure entertainment. I think that the reason Divine Arts' performances are so great is because they tell people about the human rights violations in China."

Ms. Liu said, "The show didn't manifest anger towards the brutal persecution; instead, it manifests the principle that 'good is rewarded with good, and evil meets with retribution.' The songs about Truthfulness-Compassion-Forbearance were also very peaceful and have a very strong Chinese style."

The Korean culture values loyalty to one's family and country. 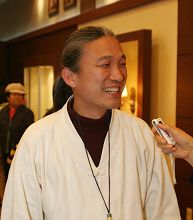 Mr. Cui Xianda, a poet, said, "Yue Fei's story made a very deep impression on me. The spirit of 'loyalty' is difficult to describe with language, but the performers manifested it through dance."

Ms. Zheng Zhenzi, the chair of the Association of Traditional Tea Culture, said that she cried when she saw Yue Fei's loyalty to his mother and country.

Mr. Zheng Zaixun, a researcher at the Traditional Culture Institute, said that he admires Yue Fei, so the dance about Yue Fei was his favorite. He praised the dancers because they manifested Yue Fei's image perfectly. 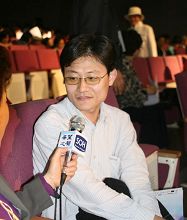 Mr. Han Guangxi, a reporter at a radio station, said that the heroic spirit manifested by the dances made a very deep impression on him and he was touched by the spirit of Yue Fei and his mother.

Ms. Piao Wenji said, "In both China and Korea, the meaning of 'loyalty' is the same and is valued by everybody."