On February 10, 2007, a parade and a press conference were held in Jhongli to support 18 million withdrawals from the Chinese Communist Party. Representatives from the Global Service Center for Quitting the Party, the Epoch Times, and the Association for the Rescue of Falun Gong Practitioners Being Persecuted gave speeches. One hundred members of the Divine Land Marching Band from Taiwan also attended the activity. 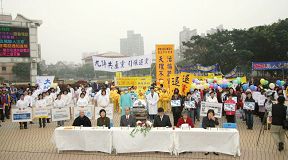 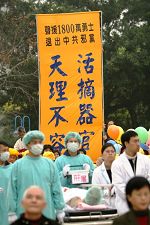 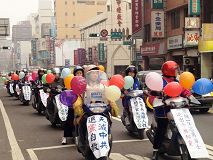 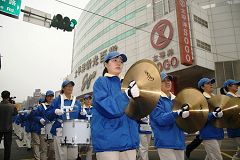 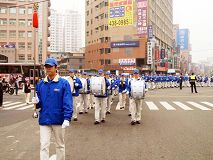 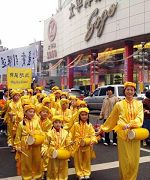 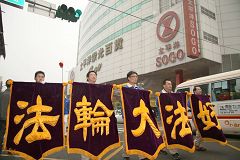 The Divine Land Marching Band led the parade, with groups from Minghui School, the Epoch Times and Falun Gong practitioners also taking part. Many citizens watched the parade. After they learned what the parade was about, they were all very supportive.

Mr. Qiu Jiaxin, the representative from the Service Center for Quitting the Party, said that the withdrawals from the CCP are from people from all walks of life in China. The CCP was shocked when the number of the withdrawals rose above 10 million. Mr. Qiu said that more and more Chinese people recognize the true nature of the CCP, and have decided to quit the party, which shows that Chinese people are waking up, and they want to dissolve the CCP in a peaceful, nonviolent way. 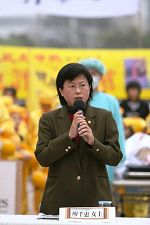 Mrs. Liao from "Association for the Rescue of Falun Gong Practitioners Being Persecuted" is giving a speech.

Mrs. Liao Qianhui from the "Association for the Rescue of Falun Gong Practitioners Being Persecuted" said that Falun Gong practitioners are treated very differently in Taiwan and Mainland China. They can freely practice in Taiwan and 80 other countries, but in China, they have been persecuted. Mrs. Liao said that "good is rewarded with good and evil meets with evil" is a heavenly principle, and 18 million Chinese people already realized the CCP's sins and brutality so they quit the party. Mrs. Liao pointed out that by withdrawing, these people not only saved themselves, but also gave hope to other people. She called upon people to have righteous thoughts for those who are being persecuted.

Mrs. Ma Shuhua from the Service Center for Quitting the Party said that the CCP has brought disasters to China and the whole world, and promoting and passing out the Nine Commentaries on the Communist Party is the best way to rescue Chinese people from the CCP. Mrs. Ma told two stories in her speech. In one of the stories, a chief of the 610 Office learned the truth from a volunteer and decided to quit the party so that he would have a wonderful future. In the other story, twenty college students told the volunteer on the phone that they wanted to quit the party, and they were willing to do something for the Service Center.

Many citizens were attracted to the rally and press conference. They supported this activity. Some of them heard about the persecution, and wanted to know more information, and some of them were touched by the Divine Land Marching Band's performance.

A young man from Vietnam was attracted to the display board in Vietnamese. He was happy to see his own language and called his friends asking them to read the display board together. He condemned the CCP's brutality and told practitioners that he often saw practitioners' activities in his hometown in Vietnam. He is interested in learning the exercises.

Several old men read the materials carefully. They supported the activities and thanked the volunteers for their efforts. 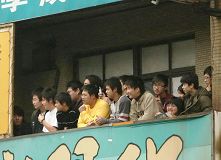 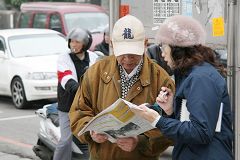 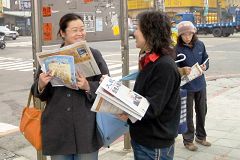 People are learning the truth.

A gentleman from Beijing told volunteers that he was a member of the CCP, but he decided to quit that day. Many people condemned the CCP's harvesting organs from living Falun Gong practitioners. Some of them thought that the media in Taiwan did not pay enough attention to it and they should report more about it.

Most people supported the activity and expressed that the organ harvesting should be exposed to the public. They thanked the volunteers for their efforts, because they know if the CCP collapses, then all the brutality such as organ harvesting will not happen again.