On November 24, 2007, Patchogue Village on Long Island, New York held their 45th annual Christmas parade. Falun Gong practitioners were invited to participate for the first time. During the parade, they displayed the beauty of Falun Dafa and publicized NTDTV's Holiday Wonders show by wearing costumes of an ancient Chinese Empress and a palace maiden. 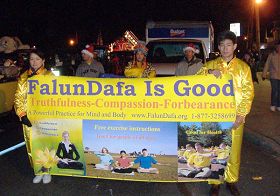 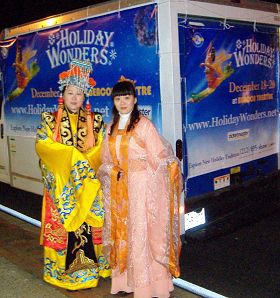 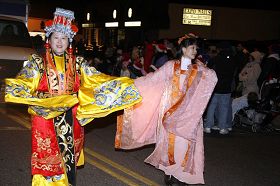 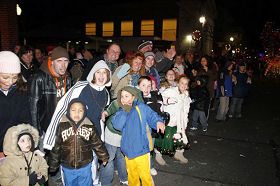 The parade began at 6 p.m. from West Avenue and Maine Street and ended at 8 p.m. at east Maine Street. There were floats, bands, Boy Scouts, military, students, etc., in the parade. The Falun Gong practitioners with their unique display of Chinese culture won warm welcome from audience.

It was said that almost all of the residents of Patchogue came out to watch the parade. People greeted each other and the parade participants with holiday wishes. The host organization stated that about ten thousand people participated in and watched the parade.

Carol Amodeo has lived in Patchogue for fifty years. Carol, her cousin Dorothy Mato, and Dorothy's husband came to watch the parade. Carol said she watched the Christmas parade every year and the parade this year was the largest and most beautiful. Falun Gong practitioners' procession added colorful Chinese culture to the parade. Carol said they would definitely go to New York to watch NTDTV's Holiday Wonders.